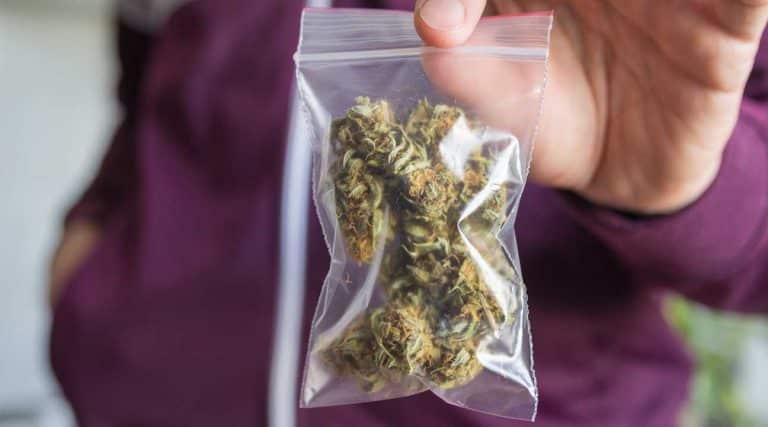 Marijuana is one of the most popular recreational drugs. Although it has been illegal across the United States for decades, it has recently attained legal status in many states.

Nonetheless, even though it may be a legal drug in many locations, marijuana can still be dangerous when abused. If you or a loved one is addicted to marijuana, seeking treatment is recommended.

Marijuana is a substance made from the leaves and flowers of the cannabis plant. It contains active compounds like cannabidiol that are not mind-altering, as well as a mind-altering compound known as tetrahydrocannabinol or “THC.”

The greater the concentration of THC, the more potent the marijuana will be.

Marijuana is available in a variety of forms, including:

According to the National Institute on Drug Abuse (NIDA), marijuana is the most widely used psychotropic drug in the country.

Throughout the years, it has been argued that marijuana is not addictive and is therefore not a dangerous drug. However, this theory is not backed by research.

In fact, the National Institute on Drug Abuse reports that as many as 30 percent of marijuana users will become addicted or suffer from what’s known as marijuana use disorder.

In addition, marijuana abuse can lead to the use of other drugs. Although not everyone who uses marijuana will move onto a more dangerous drug, some people will.

Marijuana may be considered less dangerous than other drugs, but it can still have a negative impact on your life. Marijuana use is associated with poorer physical and mental health, as well as lower life satisfaction overall.

Can You Overdose On Marijuana?

A fatal marijuana overdose is highly unlikely. However, it’s still possible to use too much marijuana at one time and suffer accidental injury or other negative consequences.

Some of the signs of using too much marijuana at one time include:

Someone who has used too much marijuana may become a danger to themselves or others and should be monitored carefully until the symptoms have passed.

Symptoms Of Marijuana Use Disorder

The potential for addiction is lower for marijuana than for some other drugs. Nonetheless, many people still become addicted to this substance.

Some of the signs of marijuana use disorder may include:

In some cases, you may not be sure whether your loved one’s use of marijuana qualifies as an addiction. If you have concerns, try to talk to the individual about their drug use and encourage them to make an appointment with a professional for an evaluation.

Someone preparing to enter a marijuana addiction treatment program will first need to stop using marijuana, which can lead to withdrawal symptoms.

While someone is going through marijuana withdrawal, the following symptoms are common:

When these symptoms are severe or bothersome, the individual may be less likely to maintain sobriety. For this reason, professional detox programs are generally recommended.

These programs offer much-needed services during the withdrawal process, including supervision to prevent relapse, medical care, and psychological support.

Marijuana addiction is best treated in a professional rehab program. The exact type of program required depends on the individual’s background, preferences, and resources.

However, some of the options typically available to patients with marijuana addiction include:

For more information on our treatment programs, please contact us today.

Does Cannabis Lower Dopamine Levels In The Brain?

THC, an active ingredient in cannabis, is known to block activity of the neurotransmitter GABA in the brain. This leads to a short-term increase in dopamine activity, resulting in a high.

However, frequent or long-term cannabis use can cause the body to shut down dopamine receptors, lowering active dopamine levels for extended periods of time.

Low dopamine levels are associated with serious mental and physical disorders, and can leave you feeling depressed and unable to take pleasure in your daily life.

Where Is Marijuana Legalized For Recreational Use?

As of this writing, marijuana is legal for recreational use in the following states:

Voters in New Jersey and South Dakota have also approved recreational legalization, which will be enacted in 2021.

What Are The Side Effects Of Marijuana Use?

Many people use marijuana for pleasurable high and therapeutic benefits. However, heavy marijuana use can have severe adverse effects on your physical and mental health. Marijuana can cause cognitive impairment, respiratory illnesses, and increases the risk for psychiatric disorders.

Learn more about The Effects Of Marijuana

Is Vaping Safer Than Smoking Marijuana?

No. While vaping marijuana exposes your lungs to fewer toxic particulates than smoking, it can be just as dangerous.

For example, since 2019, there’s been an outbreak of EVALI, which stands for e-cigarette or vaping product use-associated lung injury. Most cases of EVALI involve THC, which is marijuana’s main psychoactive ingredient.

Marijuana wax is between two to four times more potent than regular marijuana.

While marijuana and THC cannot cause fatal overdoses, taking too much can lead to unpleasant and harmful negative effects and bad reactions called greening out, especially if you don’t already have a tolerance to the drug.

Learn more about the Dangers Of Marijuana Wax

Is There A 12-Step Program For Marijuana Addiction?

What Are The Different Types Of Marijuana Strains?

The most popular types of marijuana strains are sativa hybrid, indica hybrid, and ruderalis hybrid strains. The number of strains is constantly growing as different strains of cannabis are cross-bred and combined.

Learn more about the Types Of Marijuana Strains

Is Marijuana Considered A Gateway Drug?

According to a 2020 report published by the National Institute on Drug Abuse, marijuana (as well as alcohol and nicotine) can have a gateway effect on some people but does not act as a stepping stone to harder drug use for the vast majority of marijuana users—including regular users.

Learn more about Marijuana As A Gateway Drug

Does Marijuana Help With Anxiety Or Make It Worse?

There is no definitive answer because the effects of marijuana vary individually. Some people may experience pleasurable short-term side effects, such as euphoria and reduced anxiety.

However, heavy marijuana use is associated with anxiety, panic, and paranoia in some cases. Marijuana also has a high risk for dependence and addiction, which may worsen anxiety symptoms.

Does Marijuana Help With Depression Or Make It Worse?

Some studies have shown that marijuana can provide short-term depression relief. However, other studies show that it makes depression worse, especially with long-term use.

If you’re considering using marijuana to treat depression, talk to your doctor. They can help you determine whether the potential benefits outweigh the risks, which include physical dependence and addiction.

Does Smoking Marijuana Cause Lung Cancer?

Marijuana smoke contains many of the same carcinogens (cancer-causing compounds) as tobacco smoke.

However, scientists have yet to find a link between marijuana and cancer, including lung cancer.

Still, smoking marijuana irritates your lungs and may increase your risk of lung problems such as:

Can Marijuana Abuse Cause Schizophrenia?

According to research, marijuana doesn’t seem to cause an increased risk of schizophrenia unless you’re a teenager or young adult with a genetic predisposition to the disorder.

However, anyone who abuses marijuana may experience psychosis, which is a symptom of schizophrenia that makes you feel disconnected from reality. If you don’t have schizophrenia or another psychotic disorder, the psychosis should disappear once you’re no longer high.

Marijuana may also trigger the onset of a psychotic disorder in adolescents and people who are genetically predisposed. Adolescents’ brains are still developing and daily marijuana use can increase their risk of experiencing a psychotic episode.

What Are The Latest Facts & Trends On Marijuana Use?

As of this writing, marijuana is becoming increasingly legal and accepted in the United States on a state-by-state basis.

Approximately 22.2 million Americans use marijuana each month, whether illegally or legally for medicinal or recreational purposes.

However, despite widespread use, marijuana is potentially addictive and harmful, especially when used by young people or women who are pregnant or breastfeeding. Between 9% and 30% of those who use marijuana develop some form of problematic marijuana use disorder.

Reduced gray matter and a loss of hippocampal cells may cause issues with cognition.

What Are Some Other Names For Marijuana?

The most common nicknames for marijuana include weed, pot, bud, grass, dope, Mary Jane, and herb.

Before marijuana is smoked or inhaled, it will have a distinct smell that can vary depending on the strain. This aroma is usually described as earthy, skunky, or sweet but may include notes of citrus, pine, diesel, and herbs.

When marijuana is smoked, it may add other odors from the rolling papers and heat used. The smell may also linger on your body and clothes for a period of time after it is smoked.

What Are The Risks Of Smoking Cannabis Resin?

Resin extracted from plants tends to have extremely high amounts of THC, which is marijuana’s main psychoactive ingredient. The more THC you smoke, the more likely you are to experience marijuana side effects like paranoia, breathing problems, and addiction.

Resin extracted from smoking devices doesn’t contain high amounts of THC, but it does contain smoking byproducts like ash, tar, and carbon. These substances can cause headache, sore throat, and trouble breathing.