The Effects Of Marijuana On Your Body & Brain 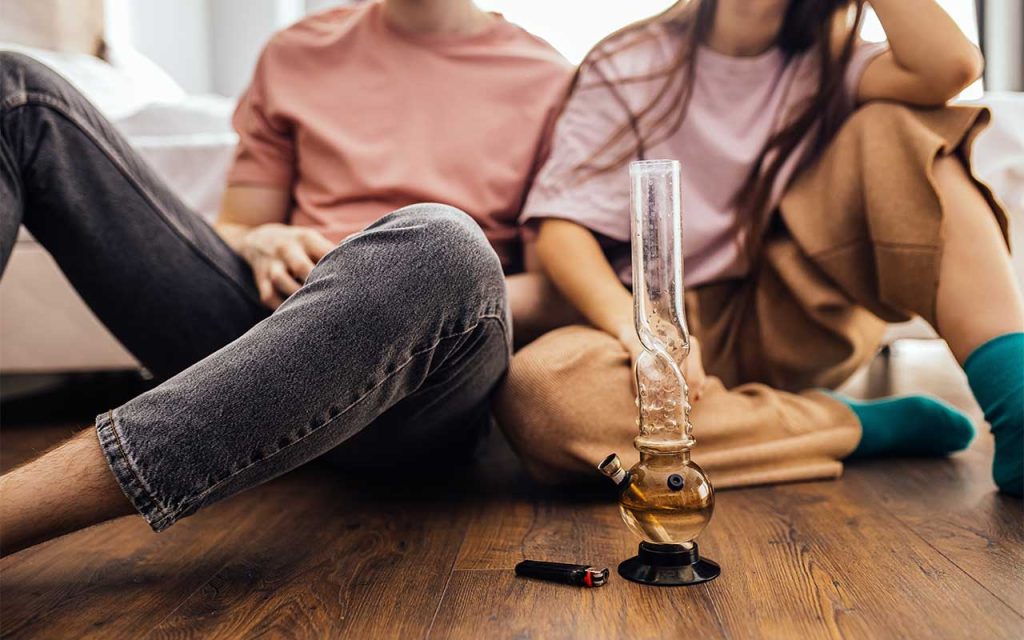 Marijuana is a psychoactive drug that produces mind-altering effects, including euphoria and relaxation. The recent legalization of marijuana in some parts of the United States may contribute to the misconception that it is a harmless drug.

Although marijuana has been shown to improve symptoms of some medical conditions, chronic use may lead to adverse effects. Marijuana can cause significant changes in several parts of the brain, affect mental health, and increase the risk of respiratory illness.

Marijuana is the dried leaves and flowers of the cannabis plant that contains the active ingredients tetrahydrocannabinol (THC) and cannabidiol (CBD).

The THC in marijuana attaches to cannabinoid receptors in your body and activates them, resulting in pleasurable effects. Smoking marijuana causes effects to occur almost immediately but edibles can take much longer (about 30-90 minutes).

Some of the short-term side effects of marijuana include:

If you use high amounts of marijuana and use it frequently, you may increase your risk for adverse reactions. When taken in high amounts, some people experience anxiety, fear, paranoia, and panic.

How Does Marijuana Affect Your Brain?

Marijuana is similar in structure to a naturally occurring neurotransmitter in your brain called anandamide. Anandamide is part of the endocannabinoid system in your body, which is responsible for several physical and mental functions.

The similarities between these two chemicals allows THC to attach to cannabinoid receptors in your brain and disrupt healthy brain communication. Chronic marijuana use can also impact brain development in adolescents and young adults.

Long-term effects of marijuana on your brain may include:

Heavy use of marijuana can disrupt the functioning of the hippocampus and orbitofrontal cortex, which can affect short-term memory and attention. This can cause difficulties with thinking, learning, and problem-solving.

Frequent use of marijuana may also contribute to the loss of neurons (nerve cells) in the hippocampus. This loss of these neurons can affect your ability to learn new information.

The severity of cognitive impairment may depend on when you started using marijuana and how long you have used it.

Marijuana can also affect the cerebellum, which is the part of the brain responsible for motor control. This can affect balance, posture, coordination, and reaction time.

The effect of marijuana on motor control can affect your ability to drive. According to the National Institute on Drug Abuse (NIDA), marijuana is the most common illegal drug detected in drivers involved in vehicle crashes.

Similar to other drugs, THC affects the reward center in your brain by stimulating the production of high levels of dopamine. This flood of dopamine is responsible for the pleasurable effects of marijuana.

However, high levels of dopamine can also encourage you to continue drug-seeking behaviors.

Daily marijuana is associated with an increased risk of developing several psychiatric disorders, especially psychosis. Your risk of mental illness is dependent on how frequently you use and if you are genetically predisposed.

Psychiatric disorders may include:

Long-term or heavy marijuana use can lead to potentially adverse physical health effects.

Marijuana may increase the risk of the following health problems:

Marijuana smoke contains toxic carcinogens and tar, similar to tobacco smoke. This increases your risk for lung cancer, disease, and infections. Heavy cannabis use can also irritate your respiratory system and may cause chronic coughing and bronchitis.

Vaping marijuana is considered extremely dangerous by the Food and Drug Administration (FDA) and is associated with hundreds of lung-related illnesses. Buying vape products containing marijuana or modifying products purchased in stores may be potentially harmful.

Chronic use of marijuana can cause addiction (marijuana use disorder) and may lead to the use of other illicit drugs. Although marijuana is perceived as less dangerous than other drugs, it can have several negative effects on your physical and mental health.

Marijuana use disorder is a treatable disease that may require professional treatment, such as inpatient and outpatient programs. These programs may offer behavioral therapy, support groups, and counseling.

To learn more about how we treat marijuana addiction, please contact us today.