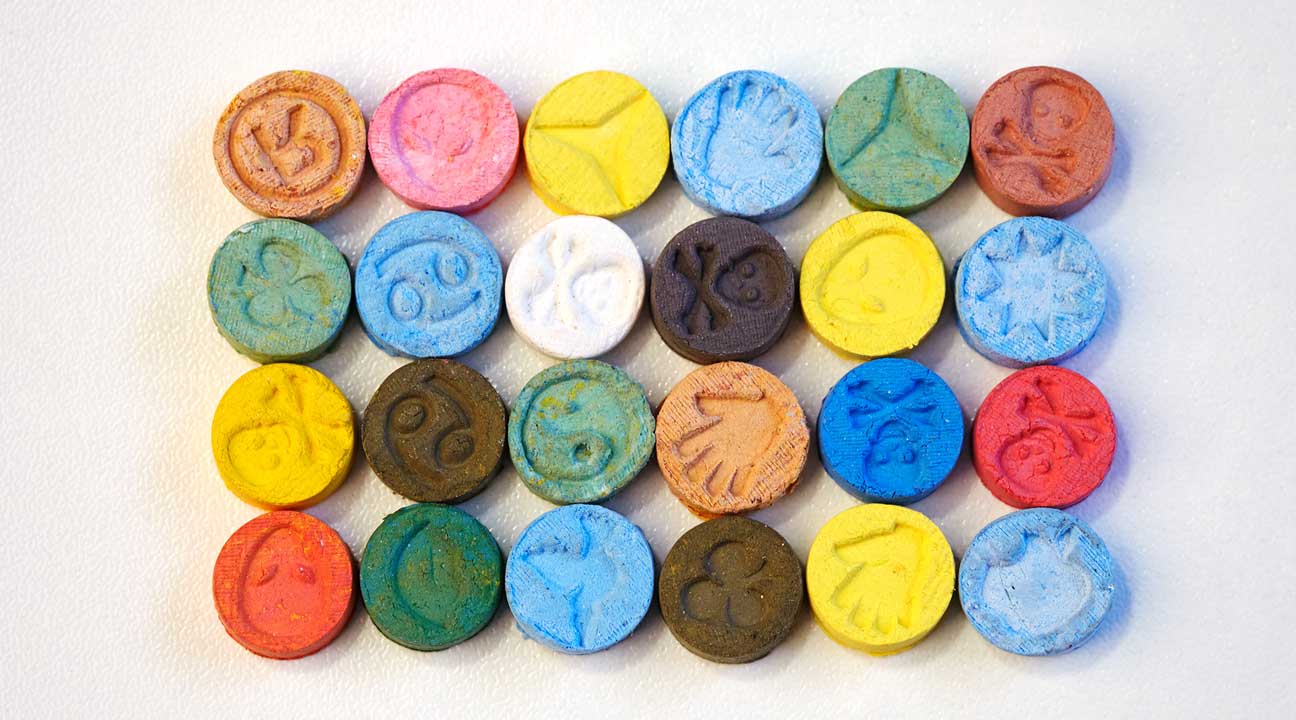 Hallucinogens are psychoactive drugs that disrupt the way brain cells and certain neurotransmitters interact in the brain.

LSD, ecstasy, and other hallucinogens specifically target serotonin receptor cells in the spinal cord and brain. Serotonin is a neurotransmitter involved in regulating sensory perception, mood, sleep, and appetite.

Side effects of taking hallucinogens include:

Statistics show that in 2019, nearly 130 million people in the U.S. used LSD or other psychoactive drugs like marijuana.

Some of the most commonly abused hallucinogens in the United States include:

Discovered in the late 1930s by a Swiss chemist, lysergic acid diethylamide (LSD) is derived from fungal material that can be grown on certain grains.

LSD is taken in pill form or as a “blotter,” which is an acid-coated strip of paper that is placed on the tongue until it dissolves.

An extremely small amount of LSD (less than 20 milligrams) can cause psychoactive effects in users. Acid “trips” last anywhere from two to six hours, depending on how much LSD was ingested and the quality of the drug.

Hallucinogens are not addictive in the way opioids and alcohol are addictive because they do not affect dopamine levels nor the “reward” center in the brain.

However, tolerance may increase if LSD is taken frequently. Tolerance and addiction are two different brain/body states that produce different types of withdrawal symptoms.

Can You Overdose On LSD/Acid?

No verified reports exist claiming someone died from an LSD overdose. People who seriously harm themselves or die from overdosing on LSD have usually engaged in risky activities, such as attempting to fly out a window or driving recklessly while hallucinating.

Taking too much LSD could also exacerbate chronic medical conditions that could lead to health complications or death.

Ecstasy (MDMA or “Molly“) is a laboratory-made, psychoactive stimulant that distorts sensory perceptions by destabilizing serotonin levels in the brain.

Side effects of using Ecstasy include:

Ecstasy is popular among “ravers” who attend large parties for the purpose of sexual experimentation and “tripping” on loud music and flashing lights.

Building tolerance to Ecstasy will cause withdrawal symptoms when users stop taking the drug. Since Ecstasy is more of a stimulant than LSD, it may be more addictive than other hallucinogens.

Withdrawing from Ecstasy can cause depression, anxiety, fatigue, cognitive difficulties, and cravings that can lead to further substance abuse.

Can You Overdose On Ecstasy?

An ecstasy overdose can occur if you take too much or mix it with other substances, and may induce:

There have been reports of people on ecstasy dying from heatstroke at rave parties when too much of the substance was in their system and dramatically increased their internal body temperature.

Taking ecstasy frequently can also be dangerous because the ingredients of the drug may be unknown to both the dealer and the user.

In addition to producing hallucinatory effects and euphoria, these mushrooms also cause drowsiness and relaxation unlike acid and ecstasy.

Although nonaddictive, mushrooms may be habit-forming. Tolerance can develop quickly, but toxicity levels of mushrooms are very low. The U.S. DEA currently lists psilocybin mushrooms as a Schedule 1 drug that has a high potential for abuse.

Research seems to indicate that any long-term side effects of abusing psilocybin mushrooms emerge from undiagnosed psychological disorders. However, no definitive studies exist that show mushrooms do not cause physical or psychological adverse effects from long-term use.

An anesthetic used in hospitals as a sedative given prior to surgery, ketamine is abused for its dissociative, hallucinatory effects. Ketamine users report feeling like they have left their body or that they have had a near-death experience.

A ketamine high is also capable of making you feel extremely euphoric and blissful. Ketamine bought on the street has either been stolen from medical facilities or is the impure product of a dealer’s laboratory.

Yes. If you or someone you know is abusing ketamine, entering an inpatient rehab treatment center may be necessary for overcoming the addiction. Completing medical detoxification is essential before beginning behavioral therapy.

Ketamine addictions are known to cause ulcerative colitis and possible neurological impairments. Withdrawal symptoms are predominantly psychological but include overwhelming cravings that make it difficult to self-wean from ketamine.

Can You Overdose On Ketamine?

A ketamine overdose is possible when someone takes too much or mixes it with other substances like alcohol. Loss of consciousness is a typical sign of a ketamine overdose, as well as slow breathing, stupor-like symptoms, and coma.

Treating an addiction to any type of hallucinogen involves counseling and behavioral therapies meant to resolve why you feel the need to take drugs.

No FDA-approved medications are available for specifically treating hallucinogen addiction. However, antidepressants and benzodiazepines may be temporarily prescribed to reduce anxiety and depression in severe cases.

Outpatient treatment is typically successful as long as patients adhere to counseling appointments at their treatment center. Inpatient treatment is another option that involves more intensive residential care where you stay in a rehab facility for the duration of the program.