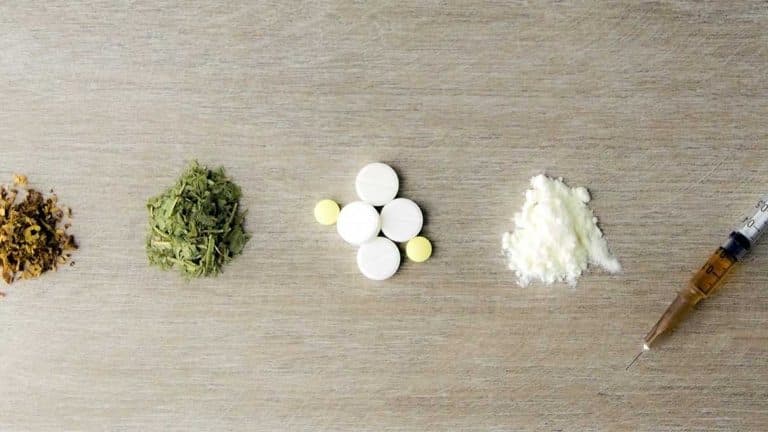 In the United States, 10 percent of adults experience drug addiction at some point in their lives.

Opioids are drugs that treat various forms of pain, including chronic pain, cancer pain, and post-surgery pain. Along with easing pain, they can make you feel relaxed and euphoric, or “high.”

Some people abuse opioids (use them in a manner not prescribed by a doctor), which can lead to addiction.

Carfentanil is the most potent opioid. Veterinarians use it to sedate elephants and other large animals.

Because it’s so powerful, carfentanil is not intended for human consumption. People who use the drug face an extremely high risk of fatal overdose.

While it’s often prescribed on its own, codeine also appears in many cough syrups and other combination medications, such as:

As one of the most powerful opioids (second only to carfentanil), it can cause a very intense high. That’s why some drug dealers add fentanyl to street drugs like cocaine, heroin, and methamphetamine. Fentanyl-laced street drugs pose a high risk of overdose.

Hydrocodone treats severe pain. It’s prescribed under the brand names Hysingla and Zohydro ER. It also appears in the combination medications Norco and Vicodin, both of which also contain acetaminophen.

Methadone treats severe pain. It can also ease withdrawal symptoms in people recovering from addictions to other opioids. It’s prescribed under the brand names Dolophine and Methadose.

Oxycodone treats moderate to severe pain. It’s prescribed under the brand names Oxaydo, Oxycontin, and Xtampza ER. It also appears in combination medications such as:

Suboxone decreases withdrawal symptoms in people who are addicted to opioids. It’s a combination medication that consists of buprenorphine (a partial opioid agonist) and naloxone (an opioid antagonist).

Illicit drugs are drugs that are illegal to use, make, or sell. They’re often highly addictive. Common illicit drugs include:

Cocaine is a stimulant drug made from the leaves of the coca plant. It’s a white powder that can be snorted or injected. As a stimulant drug, it can make you feel energized, euphoric, and anxious. It poses a high risk of addiction.

Crack cocaine is a type of cocaine that’s usually smoked in a glass pipe. It’s made by cooking cocaine powder into small rocks. Like powder cocaine, it’s highly addictive.

GHB (gamma hydroxybutyrate) is a depressant drug that’s available as a clear liquid or white powder. It makes you feel relaxed and euphoric, which is why it’s popular at parties and nightclubs. People who regularly use GBH face a high risk of addiction.

The drug can also cause loss of consciousness. That’s why it’s sometimes used as a “date rape drug” (a drug used to incapacitate someone before sexually assaulting them).

Flakka is a synthetic drug made from an amphetamine-like stimulant called alpha-PVP. It belongs to a group of drugs called synthetic cathinones (also known as “bath salts”), which are related to the khat plant.

The drug resembles white or pink crystals and can cause hallucinations, delusions, paranoia, and aggression. It’s also highly addictive.

Hallucinogens (also called psychedelics) are drugs that alter your thoughts, emotions, and awareness of your surroundings. They can make you hallucinate (see, hear, or feel things that aren’t there) and, in some cases, dissociate (feel disconnected from your body and environment).

Although they’re generally not addictive, hallucinogens can cause serious side effects, including extreme anxiety and psychosis (loss of connection with reality). Common hallucinogens include:

Heroin is a semi-synthetic opioid made from the natural opioid morphine. It’s available as a black goo or a white or brown powder. It can be injected, snorted, or smoked. Like other opioids, it’s highly addictive.

Inhalants are household and industrial chemicals that can be inhaled to produce a feeling of euphoria. They’re most often used by young teenagers.

Common types of inhalants include:

Marijuana is a mix of dried parts from the marijuana plant (also called the cannabis plant). It can be smoked, vaped, or mixed with food and eaten.

Common effects of marijuana include mood changes, altered perceptions, and increased appetite. It may also help treat certain health conditions, such as chronic pain. The drug is legal in some U.S. states.

Like flakka, mephedrone is a stimulant drug and synthetic cathinone. It’s a white powder that can have dangerous effects such as paranoia, hallucinations, extreme panic, depression, and aggression. The drug can also cause addiction and damage your heart, kidneys, and arteries.

Methamphetamine, or meth, is a highly addictive stimulant drug. It typically resembles a clear or white powder. It can be snorted, injected, or eaten.

As depressants, they can make you feel relaxed and euphoric. Some people abuse benzodiazepines by using them in a manner not prescribed by a doctor. Benzodiazepine abuse often leads to addiction.

Ativan is the brand name for a benzodiazepine called lorazepam. It’s often used to treat anxiety before medical procedures.

Halcion is the brand name for a benzodiazepine called triazolam. It’s used to treat insomnia.

Klonopin is the brand name for a benzodiazepine called clonazepam. It can treat seizures, anxiety, and panic attacks.

Librium is the brand name for a benzodiazepine called chlordiazepoxide. It’s often used to treat alcohol withdrawal symptoms, such as anxiety and agitation.

Limbitrol is the brand name for a combination medication that consists of chlordiazepoxide and an antidepressant called amitriptyline. It’s used to treat depression and anxiety.

Restoril is the brand name for a benzodiazepine called temazepam. It’s usually used to treat insomnia.

Serax is the brand name for a benzodiazepine called oxazepam. It’s used to treat anxiety, including anxiety caused by alcohol withdrawal.

Valium is the brand name for a benzodiazepine called diazepam. It’s used to treat anxiety and agitation caused by alcohol withdrawal. It can also be used alongside other medications to treat seizures and muscle problems (such as muscle spasms or muscle stiffness).

Xanax is the brand name for alprazolam. It’s used to treat anxiety and panic attacks and has a high potential for abuse.

Sleeping pills are prescription or over-the-counter medications that can help you fall asleep. Some of them pose a high risk of abuse and addiction, especially when used in a manner not prescribed by a doctor.

Ambien is the brand name for a medication called zolpidem. It’s a sedative-hypnotic, which means it slows down brain activity. It can be addictive, particularly when misused.

Lunesta is the brand name for a sedative-hypnotic called eszopiclone. Like Ambien, it slows down brain activity and can be addictive when misused.

Sonata is the brand name for a sedative-hypnotic called zaleplon. It’s only meant to be used on a short-term basis. If taken for more than a few weeks, it poses a high risk of addiction.

Barbiturates are sedative drugs that treat headaches, seizures, and insomnia. They can also sedate patients before medical procedures.

Because barbituates make you feel relaxed, some people abuse them, which can lead to addiction. Common barbiturates include:

Amytal is the brand name for a barbiturate called amobarbital. It’s used to treat insomnia and seizures.

Fioricet is the brand name for a combination medication that consists of acetaminophen, caffeine, and a sedative called butalbital. It’s used to treat tension headaches.

Luminal is the brand name for a barbiturate called phenobarbital. It’s used to treat anxiety, seizures, and withdrawal symptoms caused by addictions to other barbiturates.

Nembutal is the brand name for a barbiturate called pentobarbital. It’s used to treat seizures and insomnia.

Seconal is the brand name for a barbiturate called secobarbital. It’s used to treat insomnia as well as anxiety before medical procedures.

Some people abuse amphetamines and other stimulants, often to enhance their performance at school or work. This behavior typically leads to addiction.

Adderall is the brand name for a combination medication that consists of two amphetamines: dextroamphetamine and amphetamine. It’s used to treat ADHD and narcolepsy.

Desoxyn is the brand name for a prescription version of methamphetamine. When used in a manner not prescribed by a doctor, it can be just as addictive as illegal meth.

Dexedrine is the brand name for an amphetamine called dextroamphetamine. It’s used to treat ADHD and narcolepsy.

Kratom is a chemical found in the leaves of Mitragyna speciosa, a tree native to Southeast Asia.

Like Concerta, Ritalin is a brand name for methylphenidate, a prescription drug that treats ADHD and narcolepsy. While Concerta is long-acting, Ritalin is short-acting. That means it enters your system immediately and wears off within a few hours.

Vyvanse is the brand name for an amphetamine called lisdexamfetamine. It’s used to treat ADHD and binge eating disorder (an eating disorder that causes episodes of uncontrolled overeating).

Antidepressants are prescription drugs used to treat depression. Depression is a mood disorder characterized by sadness, loss of interest in activities, and changes in eating or sleeping habits.

The most popular types of antidepressants are selective serotonin reuptake inhibitors (SSRIs). While these medications usually aren’t addictive, they can cause physical dependence, which means you may experience unpleasant withdrawal symptoms upon quitting them.

Lexapro is the brand name for an antidepressant called escitalopram. It can treat depression and generalized anxiety disorder.

Luvox is the brand name for an antidepressant called fluvoxamine. It can treat depression, OCD, and social anxiety disorder.

Prozac is the brand name for an antidepressant called fluoxetine. It can treat depression, OCD, some eating disorders, panic attacks, and  premenstrual dysphoric disorders.

Other medications that may cause abuse and addiction include:

OTC (over-the-counter) medications are medications that are available without a prescription. Although they’re generally safer than prescription drugs, OTC medications can still contribute to addiction and other health problems, especially when misused.

Muscle relaxants (also called muscle relaxers) are medications that treat muscle spasms (sudden, involuntary muscle contractions) and muscle spasticity (an abnormal increase in muscle tone or stiffness). They can be addictive when misused.

While benzodiazepines are some of the most common anti-anxiety drugs, there are also other options. For example, buspirone (BuSpar) is a prescription drug that decreases anxiety by impacting the brain chemicals dopamine and serotonin.

In addition, some medications that were designed to treat other ailments can also ease anxiety. These medications include:

In general, these medications aren’t addictive. However, they can have unpleasant side effects and interact negatively with other drugs, especially when misused.

Antipsychotics are medications used to treat psychosis. Psychosis is a temporary loss of connection with reality that’s usually characterized by hallucinations and delusions. It’s often a symptom of a mental health condition like schizophrenia or bipolar disorder.

Anticonvulsants are medications that prevent and treat seizures. In some cases, they can also help treat mental health conditions, such as depression, anxiety, bipolar disorder, and schizophrenia.

While these medications generally aren’t addictive, you should always talk to your doctor before starting or stopping use. If you quit an anticonvulsant too suddenly, you face a high risk of seizures.

If you or someone you love struggles with drug use, please reach out to an Ark Behavioral Health specialist. We provide comprehensive, evidence-based treatments for drug addictions of all kinds.