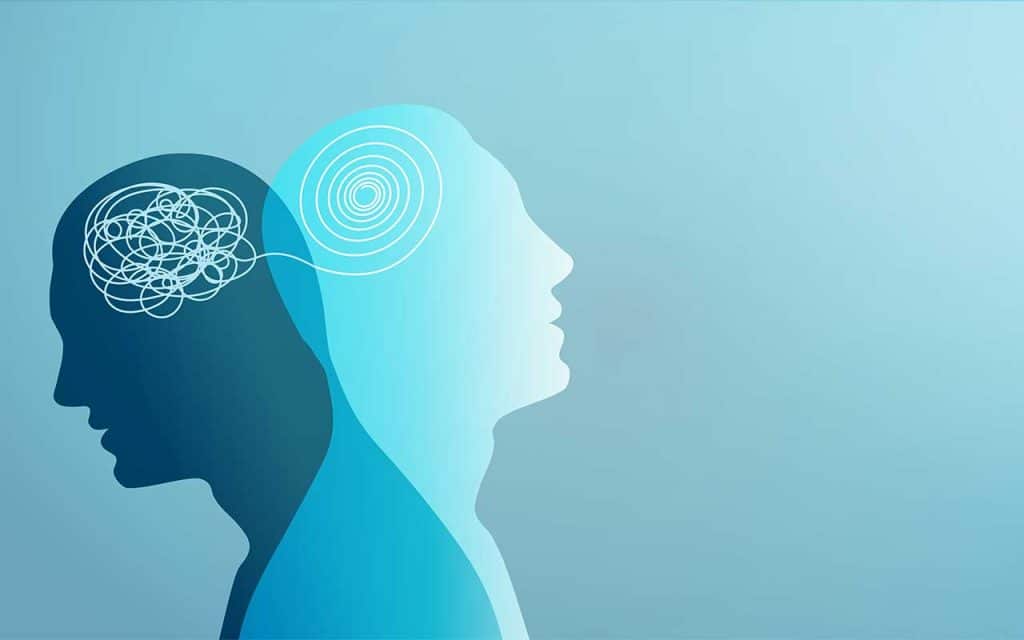 While it’s impossible to determine which condition came first, it’s crucial to receive integrated treatment for addiction and any co-occurring mental health issues at the same time.

What Is Dual Diagnosis?

Dual diagnosis is a term for when someone suffers from addiction and a co-occurring mental health disorder. Almost four percent of the adult population in the United States struggled with dual diagnosis in 2018.

Although treating co-occurring disorders can be challenging, integrated care uses both addiction treatment and mental health professionals to provide a whole-patient approach.

Substance use disorder (SUD) is the medical term for addiction and is defined by the fifth edition of the Diagnostic and Statistical Manual of Mental Disorders (DSM-5).

Addiction is a chronic disease that includes the repeated misuse of drugs or alcohol despite harmful consequences. People with alcohol or drug addiction engage in compulsive behaviors that can create health issues and social problems at home, work, or school.

It’s important to remember that substance use disorder is a mental illness. Addiction changes the chemistry of the brain and replaces the person’s behavior, needs, and priorities with finding and using drugs or alcohol.

Mental illness involves any health condition that affects thinking, behavior, or mood. Mental health problems are wide-ranging and can interfere with:

There is nothing “wrong” with you if you have mental illness. In fact, mental health issues are common—one in five U.S. adults experience mental illness every year, and many unfortunately self-medicate with drugs or alcohol instead of seeking professional care.

Over seven percent of adults in the U.S. have one major depressive episode per year. Depressive disorder changes day-to-day function and includes symptoms, like a loss of energy or lack of interest in favorite activities, that last for at least two weeks.

Depression and other mood disorders are the most common mental health conditions among SUD patients.

One survey of over 40,000 adults found that 17.7 percent of respondents had a dual diagnosis of an anxiety and substance use disorder.

Bipolar disorder features dramatic changes in mood, energy, and thinking ability. People with this condition go back and forth from an extreme high or elation (mania) to an extreme low (depression). This mood disorder may worsen overtime and lead to an SUD if left untreated.

Eating disorders are more likely to occur within the addiction recovery community than the general population, and bulimia nervosa commonly co-occurs with alcohol abuse.

Obsessive-compulsive disorder (OCD)  is defined by unwanted and repetitive thoughts or obsessions along with irrational urges to carry out certain actions or compulsions. People are likely aware that what they’re doing is irrational, but they still can’t stop themselves.

One study found participants with OCD most commonly abused substances like marijuana, alcohol, and cocaine.

Posttraumatic stress disorder (PTSD) occurs after a traumatic event like an accident, sexual assault, natural disaster, or miltary combat experience. There are both short-term and long-term symptoms, and PTSD often co-occurs with substance use, anxiety, and depression.

It’s estimated that nearly 40 percent of veterans and the general population struggle with a dual diagnosis of PTSD and SUD.

Schizophrenia is a serious mental health condition that affects thinking, emotions, decision-making, and relationships with others. Symptoms include hallucinations, delusions, disorganized thinking, and speaking in a disconnected way.

People with schizophrenia have higher rates of substance use disorder than the general population at large.

Borderline personality disorder (BPD) involves feeling intense emotions for long-periods of time, difficulty controlling these emotions, and having a hard time calming down after a triggering event.

Some people may use alcohol or drugs to better control their emotions, and many with BPD will be diagnosed with SUD at some point.

Other personality disorders that can co-occur with addiction include:

The relationship between addiction and mental illness is complex. Many people who struggle with mental illness are likely to develop a substance use disorder in their lifetime, and people with addiction increase their risk of developing mental illness.

Having a dual diagnosis means each disease interacts with the other, which affects how each condition plays out. Although researchers are still trying to figure out why addiction frequently co-occurs with mental health issues, there are several known risk factors.

Multiple areas of the brain are affected by mental illness and addiction. The brain is a complex network of circuits or connections, and these circuits regulate your decision making, impulse control, emotions, and more.

Both substance abuse and mental illness disrupt these areas, which may suggest why having one condition increases the risk of developing another.

Experts believe the vast majority of substance use disorders are tied directly to your genetics. If you have a close relative with addiction or another mental health disorder, then your chances of developing one or both conditions are increased.

Experiencing physical or emotional trauma can lead to mental health issues like posttraumatic stress disorder (PTSD). People with a history of trauma or abuse may also use substances to avoid dealing with the traumatic issue or to help lessen their anxiety.

Scientists are intrigued by the link between stress and both substance use and mental health disorders. Stress is a significant risk factor for relapse after addiction treatment, and long-term or chronic stress from a young age can also play a role in developing psychiatric disorders.

The environment where people live can influence their risk for mental illness, substance abuse, or both. Growing up in a situation with heavy drug or alcohol use, stressful situations, traumatic experiences, and other events may put people at risk from a young age.

There is no clear set of signs and symptoms for co-occurring disorders because each person experiences mental illness differently, and each substance use and mental health disorder has unique warning signs.

However, to identify someone with co-occurring disorders, look for signs of both addiction and mental illness:

Additional signs and symptoms of addiction include:

Additional signs and symptoms of mental illness include:

If someone is repeatedly using drugs or alcohol to deal with any of the feelings or signs on the above lists, they likely need to seek help as soon as possible.

Treating and diagnosing co-occurring disorders is complicated and requires an integrated treatment approach. Integrated care involves a team of multidisciplinary professionals and treatment options that can address both addiction and mental illness at the same time.

Effective integrated treatment includes a collaboration between clinical providers, addiction treatment professionals, and supportive services to address the wide-ranging issues that contribute to mental illness and substance use.

Professionals who may be involved in a treatment plan for dual diagnosis include:

Integrated care also allows for an individualized approach that hinges on effective communication and coordination of services. With this approach, someone suffering from dual diagnosis should have access to a full continuum of care, which may include:

Consider the following dual diagnosis facts and statistics that were pulled from a 2018 SAMHSA National Survey on Drug Use and Health:

If you or a loved one has been diagnosed with a substance use and mental health disorder, our treatment centers use a whole-patient approach to address both disorders.

We understand living with mental illness is difficult, but getting started with treatment is easy. Contact us to connect with a trained treatment specialist today.

How To Tell If Your Child Has An Addiction