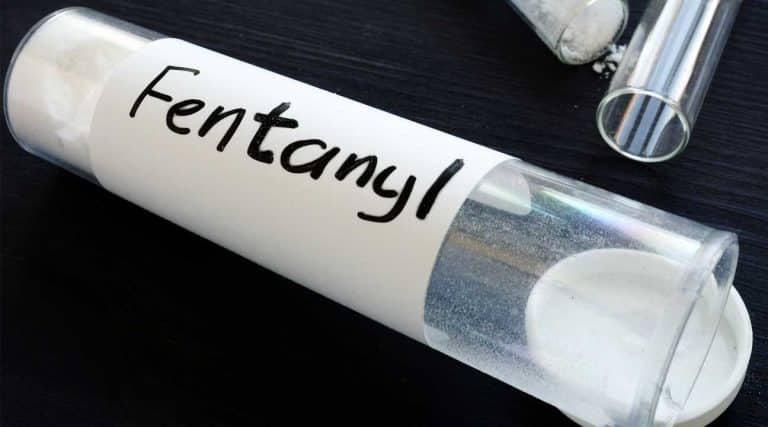 According to the National Institute on Drug Abuse (NIDA), overdose deaths involving fentanyl or fentanyl analogs have been on the rise over the past two decades.

In fact, during 2018 alone, more than 31,000 overdose deaths involving synthetic opioid analgesics like fentanyl were recorded in the United States.

Fentanyl is one of the most dangerous opioids available, and it has a high potential for addiction. Fortunately, effective substance abuse treatment is available to help people who become addicted to fentanyl.

Fentanyl is a synthetic opioid, which means it is man-made. It’s prescribed by medical professionals to treat severe pain or chronic pain on a short-term basis.

Fentanyl is available in the form of:

Medical professionals may also use fentanyl together with other medications for anesthesia or as pain relievers for cancer pain.

This drug can be made and sold illegally as well, and some fentanyl street names include:

The signs of fentanyl addiction may vary from one person to the next. In general, you may be able to tell that someone has become addicted to fentanyl by looking for signs of recent drug use, as well as long-term addictive behaviors.

Some of the fentanyl side effects that may indicate recent drug use include:

You can verify that someone has used fentanyl recently with fentanyl test strips. However, many users may be unwilling to take a test.

Even if you don’t notice the signs of recent fentanyl use, you may still see other signs of fentanyl addiction:

Fentanyl & The Risk Of Overdose

One of the aspects of fentanyl that makes it so dangerous is its strength. Even in small amounts, this drug can be fatal.

Single fentanyl patch doses can lead to severe symptoms when used inappropriately. In addition, it is often mixed with other drugs recreationally, including cocaine and heroin.

You may also encounter fentanyl in weed. Mixing these substances together makes the likelihood of overdose and other complications even greater.

Although fentanyl is often bought and sold deliberately, it may also be added to other illegal street drugs, like cocaine and heroin, without the user’s knowledge. This may be done for the purposes of encouraging addiction or even with the intent to harm the user.

Fentanyl overdose is a medical emergency. If you believe a loved one has overdosed on fentanyl, you need to seek professional help immediately.

Some of the signs of a fentanyl overdose may include:

Using fentanyl or other opioids on a regular basis leads to physical dependence, even if you use it for only a short period of time.

As a result, users of fentanyl tend to experience severe withdrawal symptoms when they stop using this drug, which may include:

Some users of fentanyl may have more severe symptoms, such as seizures. Because fentanyl withdrawal can be severe and even dangerous, professional detox programs are recommended.

A professional detox program provides you with the health care resources needed to minimize withdrawal symptoms, prevent any serious health complications, and prepare you for addiction treatment.

Fentanyl addiction can be treated effectively in rehab. Several different treatment options are available to help improve your mental health and overcome addiction.

Some of the treatment options that may be available include:

If you think you or a loved one has opioid use disorder related to fentanyl abuse, contact us today to learn more about our treatment centers.

Is Fentanyl An Opioid Or Opiate?

Fentanyl is a synthetic opioid. It’s not considered an opiate because fentanyl is produced in a lab. Opiates, on the other hand, are naturally occurring substances.

Read ‘Is Fentanyl An Opioid Or Opiate?’ to learn more

How Is Fentanyl Abused?

You’re abusing fentanyl if you use the drug in any manner not prescribed by your doctor. However, the most common ways to abuse fentanyl include injecting it, snorting it, and smoking it.

To inject fentanyl, most people remove the gel or liquid from a fentanyl patch, dilute or melt it, and use a needle to inject the substance into a vein.

To snort fentanyl, some people use an illegally made fentanyl powder, while others snort the gel or liquid removed from fentanyl patches.

To smoke fentanyl, most people heat the gel or liquid from fentanyl patches and inhale the smoke and vapor.

All of these methods pose serious health risks, including overdose and death.

Learn more about the dangers of Injecting, Snorting, & Smoking Fentanyl

How Long Does Fentanyl Stay In Your System?

Read ‘How Long Does Fentanyl Stay In Your System?’ to learn more

Can You Tell If Counterfeit Pills Are Laced With Fentanyl?

The Centers for Disease Control and Prevention (CDC) warn that even though these strips can detect fentanyl, they may not be able to detect more potent fentanyl analogues like carfentanil.

Counterfeit pills are made to look like real prescription drugs, so it’s hard to tell that they aren’t authentic. The only way to know for sure that they’re safe is to get them from a registered pharmacy with a prescription.