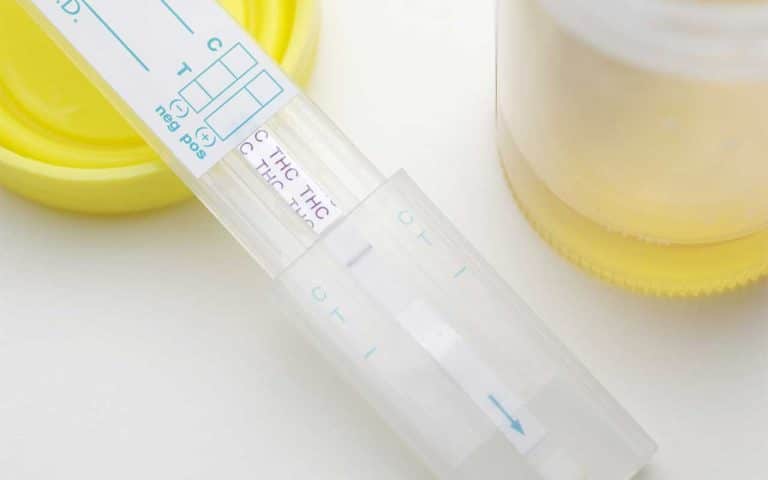 Marijuana (cannabis) is an illicit psychoactive drug used both recreationally and medicinally. Although the effects of marijuana wear off within hours, it can stay in your system for much longer.

Depending on the frequency of cannabis use, it can take anywhere from 2-28 days for marijuana to leave your system. Elimination time is mainly dependent on your frequency of use and the length of time you’ve used.

The half-life of a drug is the amount of time it takes to reach half of the maximum concentration in your system. It usually takes a drug about 5 half-lives before it is completely eliminated from your system.

Marijuana contains the psychoactive cannabinoid tetrahydrocannabinol (THC), which has a half-life of about 14-38 hours. This means it can anywhere from 2-7 days for it to be eliminated from your system.

However, some reports found the half-life of THC may be significantly longer, or about 3-4 days.

This may be true with long-term marijuana use because THC can be stored in fat cells and accumulate. The accumulation of THC can extend the length of time it takes THC to leave your system.

Marijuana is broken down by the body into metabolites, which are detectable on drug tests and can remain in your system even longer than THC.

The major THC metabolite is THC-COOH, which is the main metabolite used to detect cannabis on drug tests and lasts the longest in your system.

How Long Does Marijuana Stay In Your Urine?

Urine drug tests are the most common way to detect marijuana, which may show positive results several days after the last use. With heavy use, THC can sometimes be detected for several weeks.

The following are estimated detection windows based on the frequency of use:

How Long Does Marijuana Stay In Your Blood?

Depending on the type of blood test, marijuana can be detected anywhere from 3.5 hours up to 7 days. There have been reports of THC detected in blood up to 30 days, although it is not as common.

How Long Does Marijuana Stay In Your Saliva?

Marijuana is only detectable in oral fluids for about 24 hours. However, it can be detectable even longer in people who have used marijuana for extended periods of time.

How Long Does Marijuana Stay In Your Hair?

The average person’s hair grows about a half-inch per month. Up to 1.5 inches of hair is taken near the scalp, which can detect marijuana up to 3 months after last use.

Although you may have a general idea of how long marijuana stays in your system, several factors can influence its elimination time.

Factors that can affect detection times include:

You may test positive for marijuana if you regularly take other drugs that can interfere with a drug test.

If you have a false-positive result, more detailed tests can determine if the result is caused by a different drug.

Drugs that may trigger a positive result include:

Does CBD Cause A Positive Drug Test?

Cannabidiol (CBD) is another major cannabinoid in marijuana but it does not produce the same euphoric effects associated with THC. However, it is commonly used across the United States as an alternative medicine.

CBD should not produce a positive test result when used on its own because it does not produce the same metabolites as THC. However, CBD is not regulated by the Food and Drug Administration (FDA), which means it could contain small amounts of THC.

Although trace amounts of THC may not produce a “high,” you may increase your risk of it being detected on a drug test.

Testing positive for marijuana may be a sign of substance abuse issues or addiction. Although marijuana is becoming more widely accepted in the United States for medical and recreational use, it is still considered highly addictive.

Long-term use can result in changes in the brain, which can lead to tolerance, dependence, and addiction. Inpatient and outpatient programs can help you achieve long-term recovery and improve your quality of life.