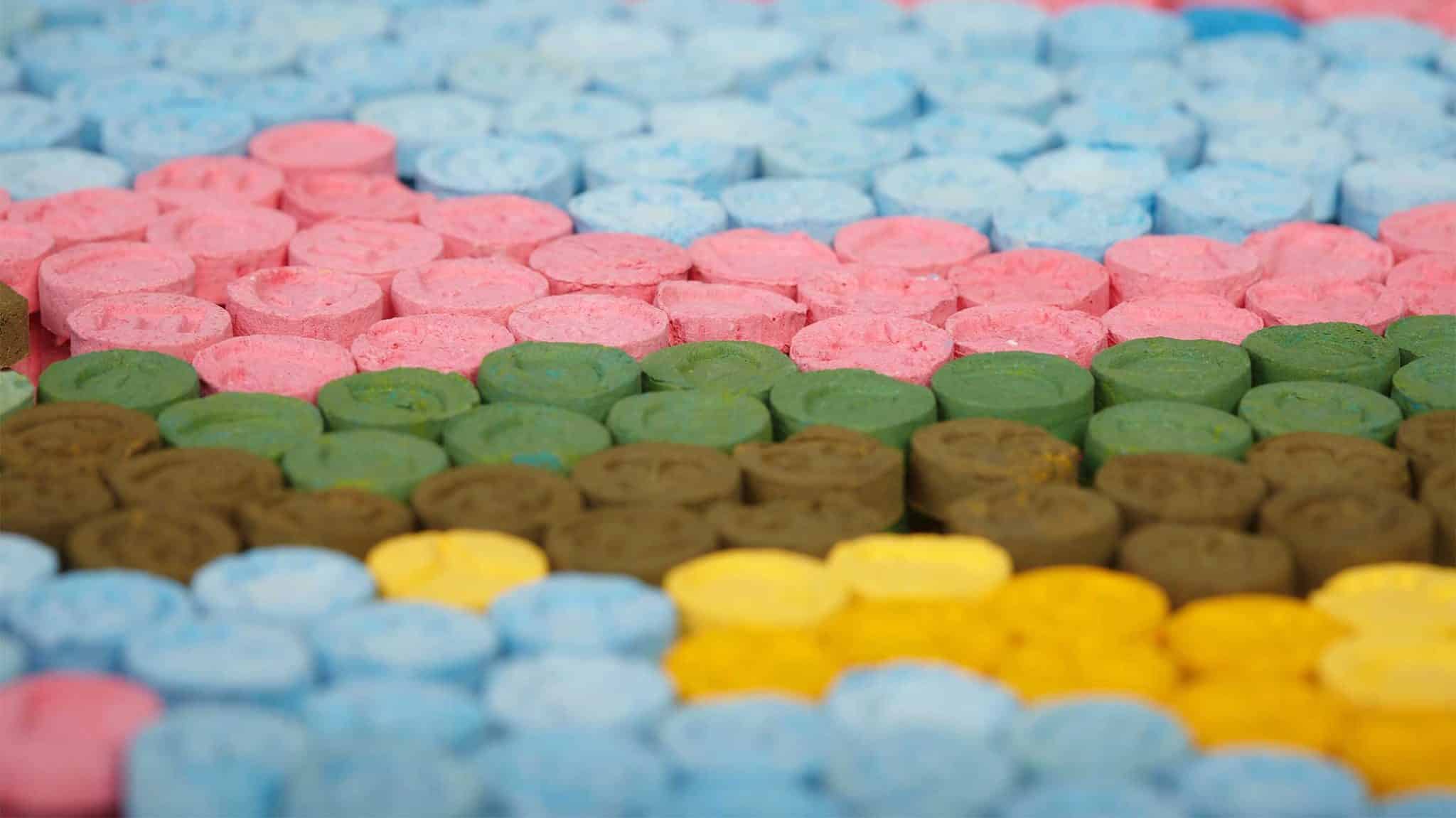 MDMA is a psychoactive “club drug” that combines effects of both stimulants and hallucinogens, leading to a range of often harmful physical and mental changes and side effects.

MDMA may be addictive with heavy use, though its addictive potential is far less than drugs like methamphetamine or cocaine, which have a high potential for abuse and addiction.

However, the repeated use of MDMA can be harmful and destructive.

3,4-methylenedioxymethamphetamine (MDMA) is a synthetic/man-made Schedule I substance in the United States. It is sold in both tablet (ecstasy) and powder form (molly). Ecstasy tablets may be brightly colored or decorated with symbols.

Generally, MDMA is taken by mouth, though it can also be snorted, smoked, or injected. When swallowed, it takes around 15 minutes to an hour for the drug to travel through the bloodstream and reach the brain, with effects that last between three and six hours.

How Does MDMA Work?

MDMA increases the activity of three key neurotransmitters in the brain: dopamine, norepinephrine, and (in particular) serotonin:

Learn more about MDMA & The Brain

MDMA has short-lived antidepressant and hallucinogenic effects. If you take the drug, you may experience:

Short-term physiological effects of MDMA use can include:

Once the initial effects of ecstasy wear off, the body will attempt to correct itself, naturally reducing neurotransmitter activity to compensate.

This can prompt symptoms of:

These symptoms are more intense and prolonged the more the drug was used prior to the recovery period. If MDMA was used moderately for a week straight, the total recovery time can last one to two weeks or more.

Based on research, it’s believed that long-term use of MDMA interferes with normal serotonin production and activity in the brain.

Low serotonin levels and long-term MDMA use are known to cause:

This reduction in pleasure from other activities may cause people to take more MDMA or other substances like marijuana or alcohol. This process can build into a physical dependence, which can lead to uncomfortable negative effects.

Learn more about the long-term Effects Of Ecstasy (MDMA) abuse

Signs Of MDMA Use

MDMA is strongly associated with raves and music festivals, other hard drug use, and risky sexual activity.

If you notice sudden behavioral shifts associated with attendance at these events or any of the comedown or long-term effects of use, it may signal MDMA abuse.

Ecstasy and Molly are frequently cut or diluted with other drugs or toxic adulterants (including bath salts), and the concentration of any particular tablet or pill can vary wildly.

Because the drug is illicit and unregulated, producers can tamper with batches freely, which makes the outcome of MDMA use extremely difficult to predict.

As a party drug, MDMA is also used with other drugs directly, including opioids, stimulants, alcohol, cannabis, antidepressants, Viagra, ketamine, amphetamine, and more.

Overdose & Other Risks Of Ecstasy Use

MDMA is unlikely to cause overdose symptoms on its own. But, MDMA is still involved in a large number of overdoses and drug-related deaths each year:

Acute MDMA withdrawal symptoms can last for up to ten days, with minor symptoms that may linger for weeks.

Withdrawal symptoms may include:

Treatment for substance use disorder, including MDMA addiction, should be carefully tailored to your needs. This includes addressing any co-occurring mental health disorders you or your loved one may have, including depression and anxiety.

Can You Snort Molly?

Molly, also known as MDMA or Ecstasy, comes in pill, liquid, and powder form. The pill and powder can be snorted into the nasal passages. This causes the drug to enter your bloodstream much faster than taking it orally.

Although snorting causes rapid and intense effects, it also increases the risk of harmful or potentially fatal effects of the drug.

How Long Does Molly/MDMA Stay In Your System?

MDMA, also known as molly, stays in your system for about 30 to 45 hours after last use. Traces of the drug, known as metabolites, can still be picked up by drug tests anywhere between 15 minutes to 90 days after the last dose, depending on the test.

What Is An Ecstasy Test Kit?

Since MDMA is unregulated, substances sold under the names MDMA, ecstasy, or molly often contain little to no MDMA.

An ecstasy test kit (also called an MDMA test kit or a molly test kit) is a drug testing kit that can help you identify what substances a drug labeled MDMA actually contains.

Learn more about How To Detect MDMA In Molly Or Ecstasy

Does The Dose Of MDMA Matter?

Taking high doses of MDMA, redosing, and mixing MDMA with other drugs and/or alcohol greatly increases liver toxicity and cardiovascular stress, as well as the risk of harmful and potentially fatal overdose.

Learn more about the Dangers Of High-Dose MDMA

Is MDMA-Assisted Therapy Safe For PTSD?

Ongoing clinical trials suggest that MDMA makes it easier for patients to process traumatic memories because the drug boosts a person’s sense of well-being, trust, and emotional openness.

However, MDMA-assisted therapy has yet to be approved by the United States Food and Drug Administration. At this time, you can only receive the therapy if you sign up for a clinical trial.

Do not try to treat your PTSD with illegally obtained MDMA. This strategy poses serious health risks, including seizures, heart failure, and fatal overdose.

Can You Smoke MDMA?

MDMA is primarily taken orally in the form of a tablet or capsule. However, MDMA is also occasionally smoked.

Research on the effects of smoking are limited but smoking generally causes rapid and intense effects. This may increase the risk of adverse effects and overdose, which can be fatal.

To learn more, read Can You Smoke MDMA?

Does Ecstasy/MDMA Cause Or Help With Depression?

MDMA and other psychedelic drugs are currently being studied as a treatment option for depression. Minimal research has found that MDMA may have therapeutic benefits on serotonin, a chemical in the brain that affects mood and happiness.

However, there are also several known potential risks of MDMA on mental health. Long-term use of MDMA may increase the risk of depression, anxiety, and paranoia in some people. In addition, MDMA can affect memory, attention, sleep, and impulsivity.

Is MDMA Comparable To Meth?

MDMA has many of the same side effects as meth, such as euphoria and hyperactivity. As stimulants, both drugs speed up the central nervous system.

MDMA differs from meth because it’s also a hallucinogen. It can alter your senses, perception of time, and awareness of the world around you.

Both drugs carry the risk of overdose and abusing them can lead to addiction.

Learn more about Meth Vs. MDMA

What Happens When You Plug Ecstasy?

By taking MDMA rectally, you introduce more of the drug to your bloodstream using the membranes and blood vessels of the rectum.

This process avoids the digestive system, increasing the drug’s bioavailability while increasing and shortening the intensity of its effects. However, plugging can increase the risk of overdose and other side effects.

Molly is a powder form of MDMA, a popular party drug with effects similar to stimulants, amphetamines, and hallucinogens.

Learn more about Molly & the dangers of synthetic club drugs