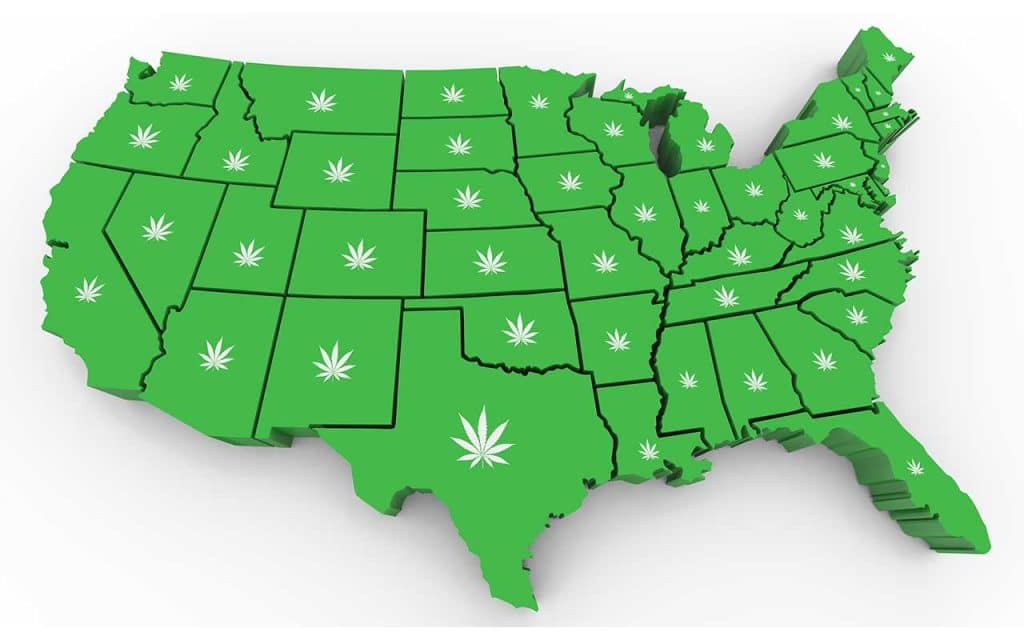 The legal status of cannabis and THC continues to change on a state-by-state basis in the United States, with legalization efforts (most often involving ballot measures) finding increasing traction among lawmakers and voters across the country.

Where Is Marijuana Legal For Recreational Use?

Washington legalized medical marijuana in 1998 and was the first state to legalize recreational marijuana in 2012. Home growing is only permitted for medical use, however.

Alaska decriminalized cannabis in 1971 and legalized medical cannabis use for qualifying individuals (though without any legal way of purchasing the plant).

In 2015, the state permitted cannabis production, sale, and recreational cannabis use. Twelve plants are allowed per household.

Marijuana became available for medical use in 2009, was decriminalized in 2014, and legalized for adult use in 2015. No commercial sales are permitted, however, six plants per adult are allowed for recreational purposes.

Medical marijuana has been legal in Oregon since 1998. In 2015 recreational use became legal, with up to four plants per household allowed.

California was the first state to approve the medical use of marijuana in 1996. Recreational use was legalized in 2016. Six plants are permitted for personal use.

Massachusetts decriminalized marijuana in 2008 and legalized recreational use in late 2012. Up to six plants are allowed for personal use.

Medical marijuana was legalized in 2000, followed by recreational marijuana use in 2016. Home cultivation of six plants per household is allowed only if an individual is 25 miles away from a retail location.

Medical marijuana has been legal in Vermont since 2004, with recreational use decriminalized in 2013 and legalized in 2018.

Vermont was the first state to legalize marijuana via the state legislature, rather than a ballot initiative. Up to two mature plants and four immature plants are permitted per adult, with no commercial production or sale permitted.

Medical marijuana was legalized in Michigan in 2008, with recreational marijuana use legalized ten years later in 2018. Up to ten ounces and twelve plants are allowed per household.

Medical marijuana was legalized in the state in 2014 and legal recreational use went into effect in 2020. However, home cultivation is only permitted for medical use.

Medical use in Arizona became legal in 2010, followed by recreational use in 2020. Six plants are allowed per adult over 21, with up to twelve per household.

Montana has permitted medical use of marijuana since 2004, with recreational use permitted in 2021. Recreational sales are expected to begin in 2022.

Medical marijuana has been legal in the state since 2010. Although voters approved recreational legalization via referendum in 2020, the state’s cannabis program has not yet been finalized.

Though recreational use is banned (either a crime or finable offense), medical use of marijuana is permitted in the following states:

States Where Marijuana Is Illegal

Marijuana use of any kind (except CBD) is a crime or finable offense in the following states:

As of this writing, marijuana remains a Schedule I drug, meaning that it is illegal to possess or use in the United States on the Federal level.

But, state decriminalization and legalization of marijuana have been tolerated by the United States Justice Department since 2013, provided that states establish regulatory bodies governing adult-use cannabis.

Marijuana cannot cause life-threatening overdose symptoms, but it can lead to addiction if used by those who are underage, or if it is taken frequently and in high doses.

If you struggle with problematic marijuana use, our treatment programs can give you access to professional care, attention, and support as you make a positive change in your life. To learn more, please contact us today.