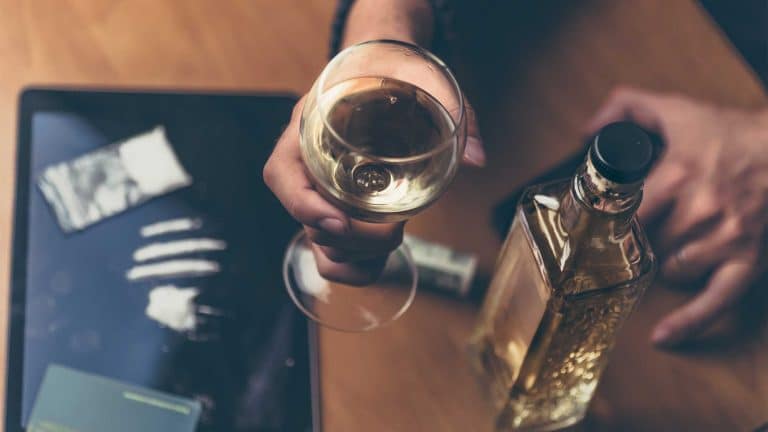 Cocaine and alcohol are two different psychoactive substances that are routinely used and abused together.

However, despite the euphoric effects that they provide, cocaine and alcohol interact in a very harmful way inside the human body. These substances should never be used together, even in small doses.

Why Alcohol & Cocaine Are Abused Together

Synergistic drugs are drugs that have effects in common, like benzodiazepines and opioids. Both of these drug types are central nervous system (CNS) depressants and tend to cause extreme sedation and respiratory impairment.

Antagonistic drugs, on the other hand, work in opposite directions.

Because of this, some may use one drug to help influence or balance out certain side-effects of the other.

Cocaine is a CNS stimulant while alcohol is a CNS depressant. Because people may wish to balance out the effects of each, some choose to drink alcohol and use cocaine at the same time for a few different reasons:

However, whenever drugs are mixed, even if they work in different or opposite ways, there is an increased risk of negative, dangerous, or even life-threatening side effects and complications.

Dangers Of Concurrent Alcohol & Cocaine Use

When taken together, alcohol (after some initially stimulating effects) will likely reduce overall CNS activity. This causes feelings of drowsiness, reduced inhibition, and impaired coordination, especially after a bout of binge drinking.

On the other hand, cocaine (both powder or freebase crack cocaine) accelerates CNS activity for a short-lived burst of energy, social extraversion, impulsivity, and euphoria.

The contrast between these two substances can lead to unpredictable and dangerous short-term effects when they’re taken together including:

Additionally, when cocaine and alcohol are mixed inside the body, they may form an even more dangerous and harmful metabolite known as cocaethylene.

Cocaethylene is formed in the liver when it metabolizes both ethanol (drinking alcohol) and cocaine at the same time.

This new substance acts as a potent stimulant, increasing serotonin, norepinephrine, and dopamine activity in the CNS to trigger a longer-lasting euphoria than cocaine.

However, this longer-lasting high puts the body under even more intense strain, which increases the risk of sudden death due to stroke, heart attack, aneurysm, and other causes by up to 2500%.

There is no other drug that interacts with alcohol like this, and as a result cocaine use and alcohol consumption (despite being a common pairing) are considered to be an especially deadly form of polysubstance abuse.

Other short-term effects of a cocaethylene high may include:

Long-term effects of cocaethylene toxicity may include:

Detoxing from either alcohol or cocaine alone can be a difficult and harrowing process. And when both drugs have been used together for a long period of time, it becomes even more complex and challenging.

As a result, inpatient care is strongly recommended, as this will allow you or your loved one to withdraw with around-the-clock supervision from treatment providers in a safe and controlled setting.

Potential polydrug withdrawal symptoms may include:

If you struggle with concurrent alcohol abuse and cocaine abuse, help is available. To learn about our addiction treatment options, including services for cocaine and alcohol use disorders, please connect with us today.