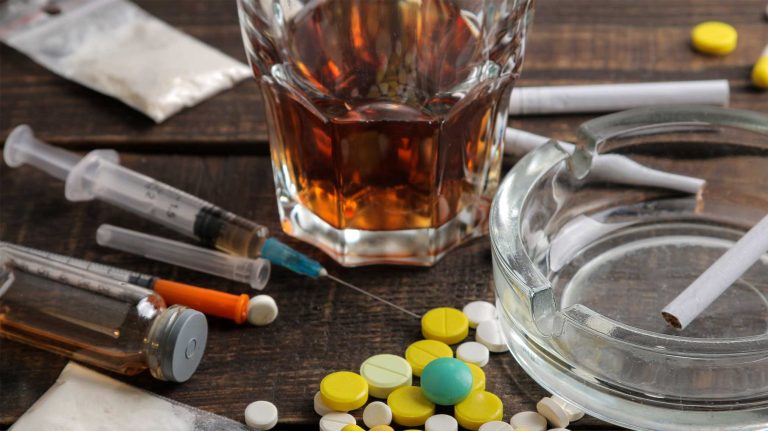 You face a much greater risk of alcohol-related problems if you mix the drug with other substances.

Mixing Alcohol With Other Substances

People mix alcohol with a wide variety of substances, including illicit drugs and prescription drugs.

However, the most common substances that are used while drinking alcohol include:

That’s because alcohol is a CNS depressant itself. When you use two or more CNS depressants at once, your brain activity, breathing, and heart rate may slow down to a dangerous degree. You may then experience an overdose that can cause brain damage, coma, or death.

Other potential side effects of mixing alcohol with CNS depressants include:

Stimulants are substances that speed up your central nervous system. There are both prescription stimulants and illegal stimulants.

If you mix stimulants with alcohol, you may experience problems such as:

Some stimulants pose additional risks of harmful drug interactions. For example, when you mix cocaine and alcohol, your liver forms a substance called cocaethylene. This substance can cause seizures and liver damage. It can also weaken your immune system.

Hallucinogens are substances that alter your thoughts, feelings, and perceptions. They can make you hallucinate (see, hear, or feel things that aren’t there) and dissociate (feel disconnected from your body).

When you mix hallucinogens with alcohol, you may experience:

In addition, since both alcohol and hallucinogens impair your judgment and self-awareness, you may drink much more than you normally would. This increases your risk of overdose.

Also, alcohol can intensify the effects of a “bad trip” (an unpleasant experience while taking a hallucinogen). These effects may include panic, depression, and frightening hallucinations.

Many medications interact negatively with alcohol.

For example, you may experience drowsiness, dizziness, and increased risk of overdose if you drink alcohol while taking:

Other medications that shouldn’t be mixed with alcohol include:

When you mix these drugs, you may experience anxiety, paranoia, sweating, dizziness, nausea, and vomiting. You’ll also face a higher risk of alcohol overdose. That’s because marijuana can decrease nausea and prevent you from vomiting alcohol out of your system.

This behavior increases your risk of certain cancers, including cancers of the oral cavity, pharynx (throat), larynx, and esophagus. That might be because tobacco contains cancer-causing chemicals, and alcohol can help those chemicals enter cells in your mouth, throat, and esophagus.

If you or someone you love struggles with alcohol abuse or addiction, please contact an Ark Behavioral Health specialist. Our substance abuse treatment centers provide medical detox, mental health counseling, and other recovery-focused services.

Can You Drink Alcohol While Taking Antibiotics?

Some antibiotics have very serious interactions with alcohol, and some have no known interaction at all. Always check with your doctor before drinking if you’re on antibiotics.

Even if you’re taking an antibiotic that isn’t believed to interact with alcohol, here are several reasons you may want to avoid alcohol anyway:

What Happens When You Mix Gabapentin With Alcohol?

When you combine gabapentin with alcohol, serious symptoms may occur. Because gabapentin and alcohol are both central nervous system (CNS) depressants, they can cause excessive drowsiness, confusion, and significant impairment.

Is It Safe To Drink Alcohol On Viagra?

Drinking alcohol and taking Viagra is likely safe for those who drink in small amounts or only in moderation. However, those who engage in excessive alcohol consumption may develop enhanced side effects they experience from Viagra.

It is not recommended to drink while taking Viagra, but a glass of wine has shown to pose no threat. Always consult with your doctor before combining medications and alcohol.

Can You Drink Alcohol On Steroids?

Drinking alcohol while on steroids is not recommended because it can cause mood swings and increase the risk of multiple health problems like high blood pressure and stroke.

What Happens When You Mix NyQuil & Alcohol?

Serious side effects can occur when you mix NyQuil and alcohol together. Some of the side effects include hallucinations, rapid heart rate, and extreme drowsiness.

Can You Drink Alcohol While Taking Meloxicam?

It’s not recommended that anyone drink alcohol while taking meloxicam because of the risk of adverse side effects like gastrointestinal bleeding, high blood pressure, and ulcers.

Can You Drink Alcohol While Taking Naproxen?

It’s not recommended that you drink alcohol while taking naproxen. It can lead to serious side effects such as stomach bleeding, gastritis, and heart issues.

What Happens When You Mix Lithium & Alcohol?

What Happens When You Mix Alcohol & Accutane?

Mixing alcohol and Accutane can lead to multiple side effects including dizziness, extreme dryness, and respiratory depression.

Can You Drink Alcohol While Taking Prednisone?

Alcohol may not directly interact with prednisone, but taking both at the same time can still increase your risk for certain serious side effects.

Can Baclofen Treat Alcohol Use Disorder?

Baclofen may be used to treat alcohol use disorder. However, it is not an approved treatment option in the United States, and the full interactions of baclofen and alcohol are still unknown. Other approved treatments for AUD also exist.

Learn more about Baclofen And Alcohol

Can You Mix Keppra & Alcohol?

Keppra and alcohol should not be mixed together because they intensify the side effects of each other. Mixing the two can lead to suicidal thoughts, dizziness, mood swings, and hallucinations.

Can You Drink Alcohol While Taking Antidepressants?

Is It Safe To Drink Alcohol While Taking Sleeping Pills?

Under no circumstances should you mix alcohol and sleeping pills, as this may cause severe sedation, drowsiness, confusion, dizziness, fainting, and even life-threatening overdose, depending on the specific substance and your dosage.

Always read the label and use medications only as prescribed and directed.

Does Clonidine Work For Alcohol Withdrawal?

Alcohol withdrawal is a condition that can result in increased heart rate, anxiety, sweats, restlessness, and irritability. These symptoms may be brought on by an overactive sympathetic nervous system.

Clonidine targets receptors in the sympathetic nervous system to help lower heart rate and relax blood vessels. It can improve mild to moderate symptoms or be used alongside other medications.

However, clonidine does not treat life-threatening symptoms of withdrawal, including seizures and delirium tremens (DTs).

Learn more about Clonidine And Alcohol