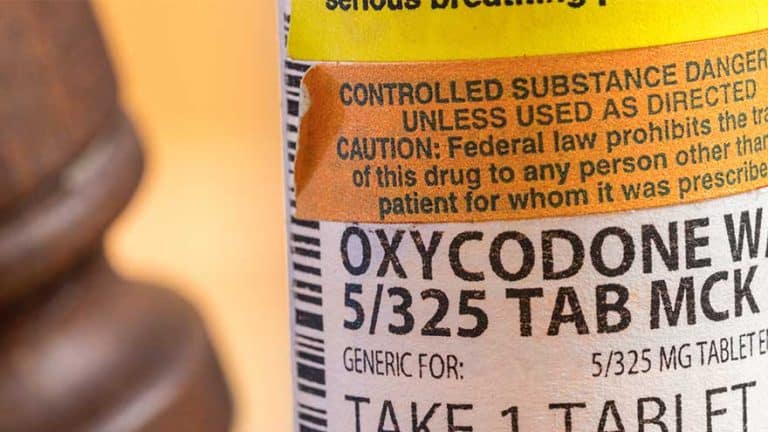 Oxycodone is a Schedule II controlled substance and opioid analgesic, according to the Controlled Substance Act as classified by the United States Department of Justice (DOJ).

Because Oxycodone is a Schedule II substance, it has a high potential for abuse that can lead to physical dependence or psychological dependence.

Oxycodone is prescribed for those suffering from severe pain. It is a central nervous system (CNS) depressant and provides a sensation of sedation when used.

This synthesized prescription drug comes from thebaine, part of the opium poppy plant. Opiates occur naturally within the plant.

Oxycodone hydrochloride is considered an opioid and when abused, this Schedule II drug can cause a number of health problems including constipation, nausea, withdrawal symptoms, or overdose.

A Breakdown Of Controlled Substances

Controlled substances belong to one of five drug schedules according to the United States Drug Enforcement Administration (DEA).

Examples of Schedule I substances include:

Severe psychological and physical dependence can develop when Schedule II substances are abused. In fact, Schedule II drugs have a high potential for abuse but have some accepted medical value as well.

Oxycodone is just one of many opioids that belong to this drug schedule. Other prescription opioids included in this category consist of:

In addition to prescription opioids, other drugs that belong to Schedule II include:

Any derivatives or preparations which are needed for the chemistry of Schedule II substances also belong to the category. These can consist of salts of isomers and secobarbital, but not naltrexone.

The drugs belonging to the Schedule III controlled substance list may have less abuse potential than the substances mentioned in schedule I or II. Schedule III drugs can still be abused and may create physical and psychological dependence.

In addition to this, some of the narcotic drugs that belong to Schedule III consist of products that do not contain more than 90 milligrams of codeine per dosage unit such as Tylenol with codeine and buprenorphine (Suboxone).

Hydrocodone is also in this category, but only when combined with acetaminophen.

Compared to the substances belonging to the Schedule III category, Schedule IV substances have a low potential for abuse. However, the medications can still be abused.

Many benzodiazepines fall into the Schedule IV classification and include:

Oxycodone may cause a number of side effects, especially when the drug is abused. The pill can be crushed into a powder and snorted, causing nasal cartilage damage as well as nosebleeds and a runny nose.

Some may inject the drug, allowing the substance to enter the bloodstream more quickly. This form of drug abuse may lead to abscesses on the skin, collapsed veins, or diseases from sharing needles.

This Schedule II controlled substance should only be taken as prescribed by your healthcare provider.

If you or a loved one are struggling with drug abuse, contact us today to speak with one of our healthcare representatives who can help you find which treatment program best fits your needs.