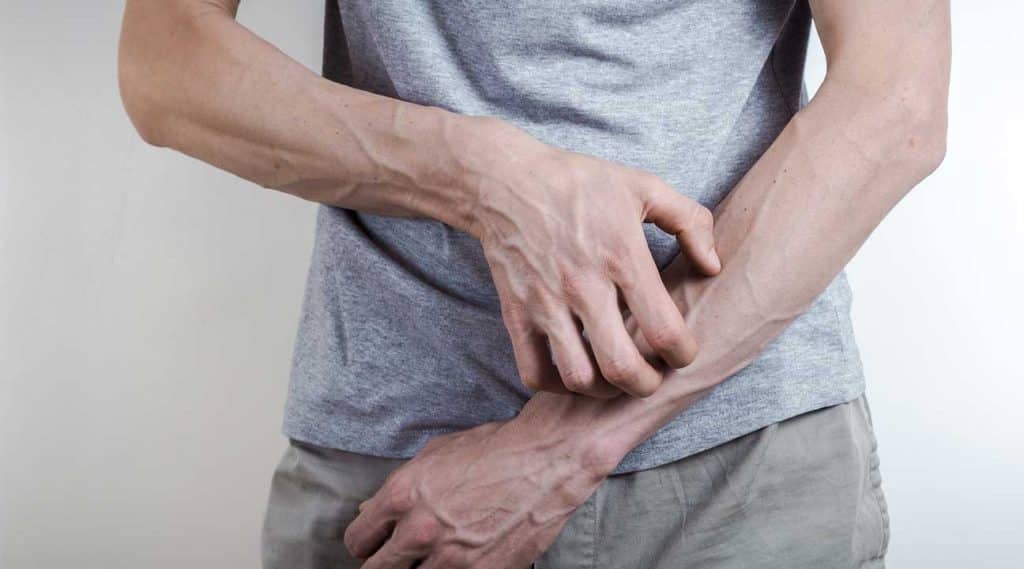 Of all the different side effects of methamphetamine abuse, the feeling of bugs crawling on or burrowing under the skin is one of the most memorable and disturbing to think about.

And even though they aren’t real, meth mites invade the minds and damage the bodies of thousands of Americans each year.

What Are Meth Mites?

Meth mites, also called meth bugs, ice mites, or crank bugs, are imaginary bugs that are felt crawling on or digging through the skin of those who use methamphetamine heavily.

This specific hallucination is known as formication, and if you were to experience it you would literally feel and maybe even see the bugs moving on or inside you—and nothing you can do would get rid of them.

Why Do Meth Mites Happen?

Meth has a number of powerful effects on the body and mind, especially when taken over and over.

With each use the drug stimulates the activity of dopamine in the synapses of the central nervous system, greatly accelerating physiological and mental activity.

This leads to sensations of pleasure, energy, and confidence—for a few hours. But, once the drug wears off, the body and brain will likely go into a depressed, hung-over comedown or crash.

Those who use meth may counter a comedown with another dose of meth, cycling through dose after dose and high after high for days at a time, pushing both body and mind to the absolute breaking point.

And at that breaking point, often after entire days without sleep, symptoms of psychosis and meth mite hallucinations become commonplace.

Meth’s wide-ranging effects can devastate your skin and its ability to heal and recover from minor injuries, like scratching or needle injections.

These effects (along with severe dental issues) are collectively known as meth face, and can include:

Because methamphetamine suppresses appetite and fatigue, as you use the drug you are more likely to neglect self-care to the point of malnutrition, dehydration, and exhaustion.

These conditions are frequently worsened by poor hygiene, weakened immune systems, and ingestion of the many toxic or poisonous compounds used in illicit methamphetamine production.

At the same time, the stimulant effects of the drug will constrict blood vessels, elevate the heart rate, and increase body temperature. These effects deprive the skin of blood flow, reducing elasticity and making it harder for your skin to heal from minor injuries.

Wrinkles and skin tags can develop rapidly, and your skin and face may age a decade or more as your misuse of the drug continues.

Meth can also cause you to sweat—a lot. And while the drug is active in your system it interferes with typical sweat production, eliminating healthy oils and causing your skin to dry out and itch.

This severe dryness and itching resulting from meth use is likely behind the crawling sensation perceived by those in the midst of methamphetamine-induced psychosis following a binge.

After days of mental stress and sleep deprivation, the resulting meth psychosis, often called tweaking, can pull you into your own unhappy reality. The sight and feel of bugs becomes so strong that you start compulsively scratching, itching, and picking at your skin in search of relief.

Meth sores may range from small red dots, to severe rashes, scabs, or infected blisters opened up on the skin. Meth sores on the face may resemble acne or canker-like rashes, while skin damage on the other areas of the body may include track marks and needle picks from injection.

These injuries may heal very slowly due to the general damage to skin function meth can cause, and they often scar permanently.

How Often Do Meth Mites Occur?

It’s estimated that between one quarter and one half of meth-dependent individuals will experience symptoms of psychosis following meth use, which often includes formication.

Formication is also much more likely to be experienced by those who use meth heavily and have developed a significant physiological dependence on meth or crystal meth.

Methamphetamine addiction is notoriously difficult to recover from. The drug’s effect on the brain’s reward center can quickly change your personality and your priorities in life, depriving you of other pleasures and passions.

The marks and damage caused by meth addiction may take years to heal, and may never completely fade. But, recovery is possible.

By working with a qualified, professional addiction treatment center and participating in medical detox, cognitive therapy, behavioral therapy, and other rehabilitation programs, you or your loved one have the best chance of healing physically, mentally, and emotionally.

How Meth Affects The Brain

How A Meth Addict Thinks