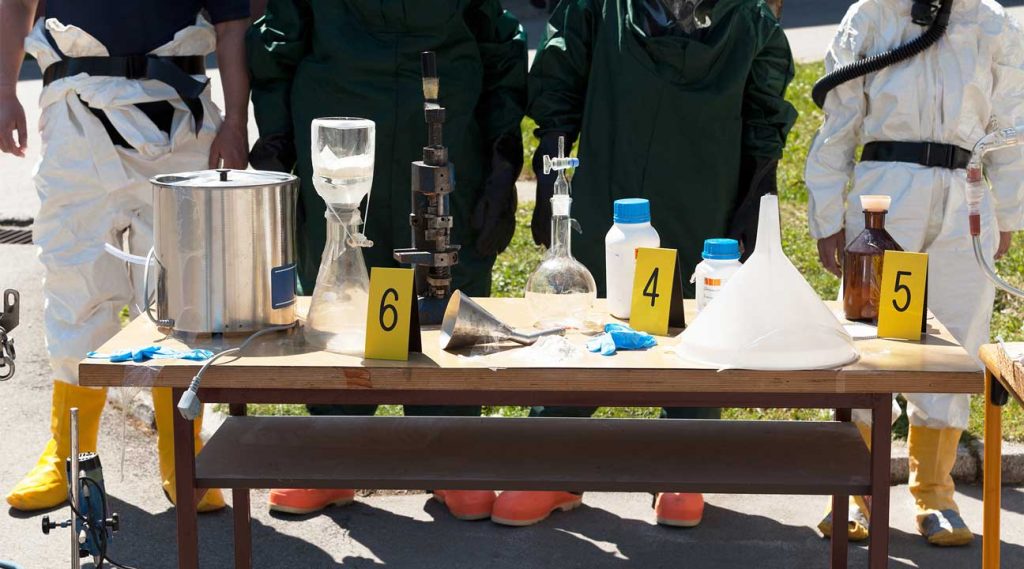 Since the passage of the Combat Methamphetamine Epidemic Act in 2005, methamphetamine production in the United States has dramatically fallen, with reported incidents declining over 80% from 2010 to 2017.

These days, the vast majority of crystal meth in the US is created south of the border and smuggled in.

However, meth houses and labs do still operate under the radar in the United States, and properly recognizing and reporting these labs can help save lives and keep you and your community safe.

How Is Meth Made?

Meth labs start with legal cold medications like pseudoephedrine or ephedrine. By way of chemical reactions, the active ingredients in these medications are extracted and converted into methamphetamine.

Methamphetamine production and meth recipes vary from source to source, but generally involve a variety of dangerous compounds and toxic chemicals, which may include:

If you notice any of the compounds listed above stockpiled in suspicious quantities, it’s a good indication that meth production may be underway.

Other common, telltale equipment involved in cooking meth may include:

Learn about the emerging Shake And Bake Method Of Meth Production

Signs Of A Meth Lab

Meth labs come in all shapes and sizes and may be run-down or well maintained and disguised. But, once again, there are common, telltale signs to watch for:

Strange behaviors associated with meth use can include:

Cooking meth is a toxic and dangerous process, and it’s no surprise that explosions, fires, and poisonings are common in meth houses and in the area around them.

Animals may sicken and die due to waste exposure, explosions can destroy entire structures or set fire to the homes nearby, and meth cooks (and their children or dependents) may be poisoned, horribly burned, disfigured, or otherwise harmed as well.

Even micro-batch shake and bake meth production can result in permanent physical harm and death if something goes wrong in the process.

What Should You Do If You Identify A Meth Lab?

First, leave and decontaminate any exposed skin or clothing.

Toxic byproducts can easily transfer within a meth lab, and meth cooks and their customers may be aggressive or violent if challenged, especially if they have been taking the drug themselves.

Instead, document your evidence and call the police and your local health department. Special elements of local law enforcement are trained to break up drug labs, and qualified remediation professionals are equipped to provide decontamination services and safely clean up the area in the aftermath.

Meth is a powerfully addictive drug that changes the brain, personality, and priorities of those who use it. But while recovery from methamphetamine addiction and the drug’s harmful health effects is challenging, it is possible.

Highly qualified, compassionate rehabilitation specialists can help you or your loved ones detox and navigate the symptoms of methamphetamine withdrawal before working towards long-term recovery.

Signs Of A Meth Addict

What Is Meth Made Of?

How To Clean Meth Residue