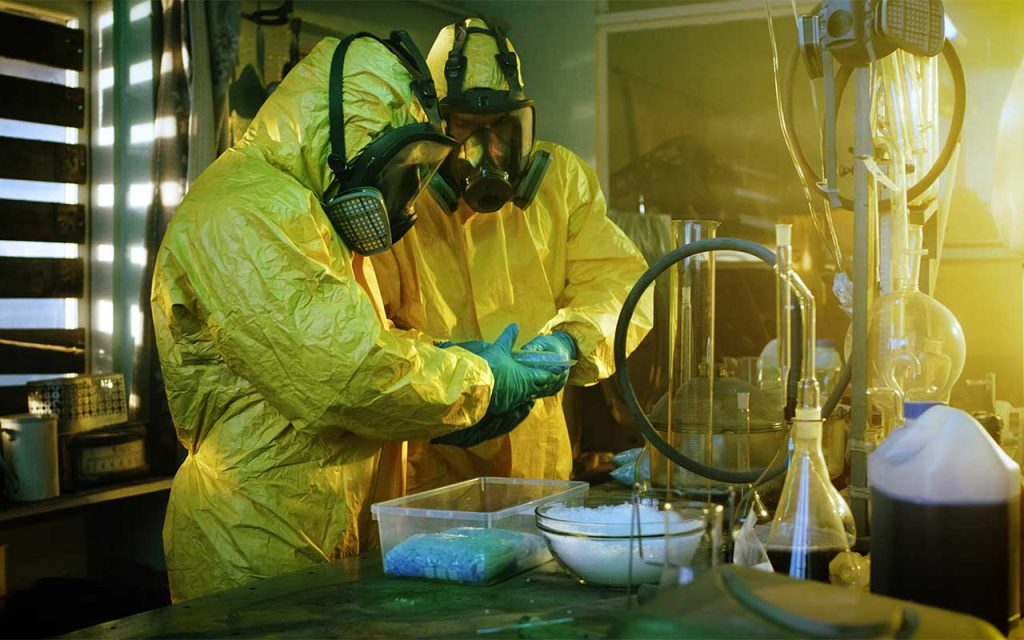 Crystal meth is made illegally in methamphetamine laboratories. Most illicit meth in the United States is imported from Mexico or made in home-based labs. However, meth labs and distribution rings in the U.S. both contribute to widespread illicit meth use.

Meth production likely involves many dangerous chemicals and ingredients. Toxic fumes from meth labs can stay in the air for a long time. Explosions and fires can also happen in meth labs, and meth cooks may be at risk for a number of health effects.

Meth can be illegally made by combining pseudoephedrine and a number of household items. These ingredients are then heated with makeshift “cooking” appliances, including coffee filters, glass bottles, and hoses.

The key ingredients used to cook meth are pseudoephedrine and ephedrine.

Pseudoephedrine is found in many over-the-counter cold medicines, such as Sudafed. It can reduce sinus congestion and is not dangerous when taken on its own as directed.

Ephedrine is a central nervous system stimulant drug. It was a part of over-the-counter weight loss supplements, but this use was banned by the FDA in 2003 due to its risks. Ephedrine is now available by injection to treat low blood pressure.

These substances, especially pseudoephedrine, are still widely available and cheap to buy. Mixing them with common ingredients can be inexpensive for meth makers.

Meth labs often cook with common household items. Many combinations of these items can be put together with pseudoephedrine to create meth.

Common items that can be used to make meth include:

Components Of A Meth Lab

Materials that are used to cook meth can be commonly found in homes and stores. Meth cooks can use:

Meth makers often punch holes in these items to use them.

With all of the common materials involved in methamphetamine production, the manufacturing process ends up being both cheap and profitable for meth cookers. However, the process of making meth illegally can be highly dangerous.

Meth makers are constantly putting themselves at legal and personal risks.

Due to the ingredients used and process of cooking meth, production of this illicit drug can lead to a variety of health risks.

Many products used to make meth are flammable. Acetone, paint thinner, battery acid, and other products can all catch fire at any point during the cooking process. The constant risk of fires or explosions make meth labs a dangerous place.

Surrounding homes and structures may also be affected by these fires and explosions. People living near a meth lab may suffer burns, respiratory irritation, digestive problems, and other effects.

Meth production involves hazardous chemicals. Battery acid, antifreeze, drain cleaner, and other ingredients can leave toxic waste behind after the process is over.

Simply standing in a meth lab may lead to inhaling large quantities of these toxic chemicals. Inhaling or touching these chemicals can cause burns, shortness of breath, chest pains, and dizziness.

Exposure to toxic waste left by meth can also affect your long-term health. Your risk of cancer, brain damage, and other serious effects may increase.

Making and selling meth is illegal. If you are caught making meth or selling it to others, you may be punished severely by law enforcement. People who have been convicted of meth production and distribution often end up serving time in prison.

Illegal meth labs are not confined to houses and garages. Meth labs have also been found in the trunks of cars, mobile homes, and vans. While a study published in 2011 showed a declining trend of meth labs being found, it continues to be a part of illicit drug problems in the U.S.

For information on our meth addiction treatment programs, please contact us today.

How To Clean A Meth House

Meth Use In The U.S.

Signs Of Meth Use