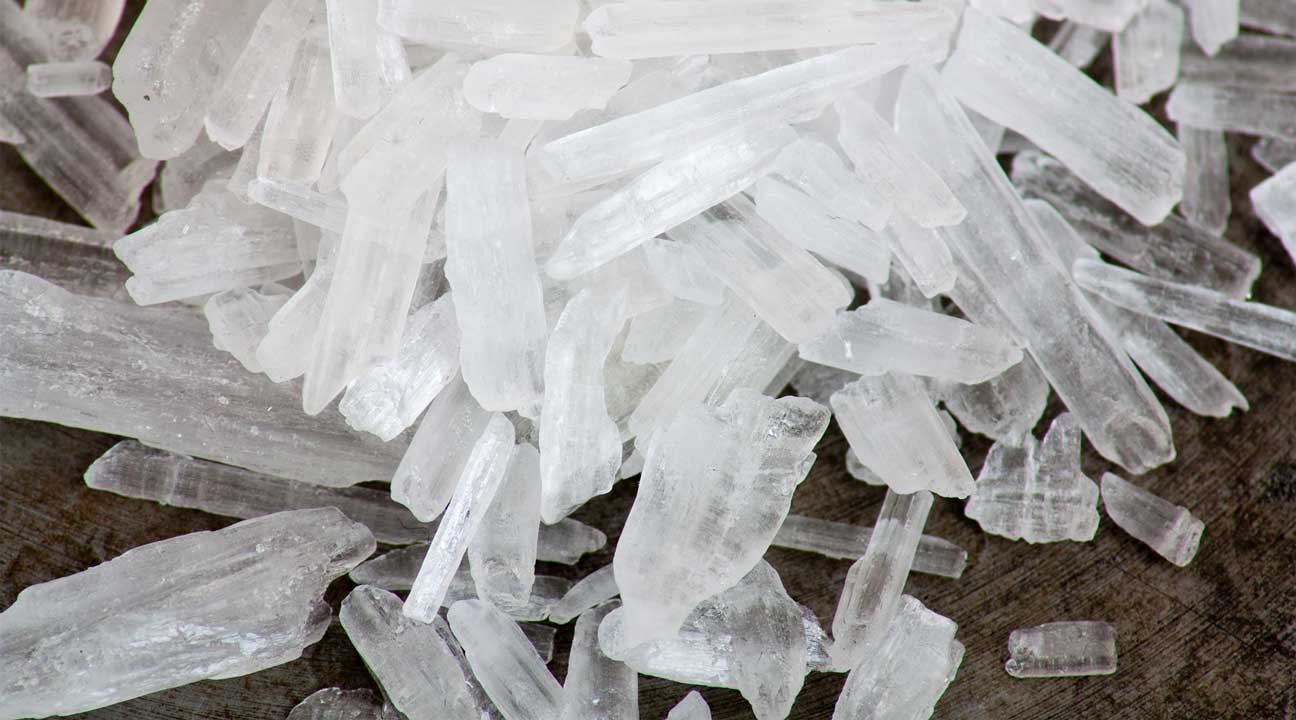 Crystal methamphetamine (crystal meth) is a form of smokable methamphetamine that causes a rapid and powerful high. It is an extremely addictive stimulant drug that affects the brain and central nervous system.

It is one of the most widely abused illicit drugs, with even higher rates of abuse than heroin or other opioids. Meth use can quickly lead to dependence and addiction, along with several serious health complications.

If you think you or a loved one may be addicted to crystal meth, it is extremely important to seek treatment.

Methamphetamines include illegal street meth and prescription drugs. Both drugs are powerful stimulants but crystal meth is much more potent than methamphetamine.

Meth comes as a pill, powder, or liquid and can be injected, snorted, or swallowed.

Crystal meth is developed in “superlabs” in Mexico and the United States. It is made with highly toxic chemicals and pseudoephedrine, an over-the-counter decongestant. The end result is a crystalized solid that can be smoked. It usually looks like shiny, bluish-white glass fragments or rocks.

Crystal meth produces a much longer high than other forms of methamphetamines, often keeping the person up for several hours or days.

Smoking crystal meth produces immediate effects but it can also be smoked or snorted. Once crystal meth enters the brain, it activates the central nervous system (CNS). It releases the neurotransmitters dopamine, norepinephrine, and serotonin, which causes a euphoric high.

Abusers may initially feel empowered and energized but once the euphoria wears off they may experience anxiety and intense cravings. Many people go on a “run” and use every few hours for several days with little food or water.

Crystal meth may cause the following side effects:

Chronic crystal meth use can lead to severe changes in the brain that can cause psychosis, paranoia, violent behavior, and dramatic mood swings.

Psychosis can cause hallucinations of bugs crawling on or under the skin, causing the user to compulsively pick at their skin. These behaviors are commonly referred to as “tweaking.”

Crystal meth affects the central nervous system, brain, and cardiovascular system. Taking too much or using it too frequently can cause stroke, heart attack, or hyperthermia (overheating).

Crystal meth overdose is serious and can result in death if the symptoms aren’t treated immediately.

Signs of overdose include:

If you witness an overdose, seek medical attention immediately.

Crystal meth abuse can quickly lead to dependence and addiction. As you develop a tolerance, you will likely require higher doses or need to use more frequently to achieve the same effects. Dependence also leads to withdrawal symptoms when you crash or stop using.

Addiction is a disease characterized by compulsive drug use despite negative consequences. Drug addiction is distinct from dependence and includes environmental, psychological, and genetic factors.

Signs of meth addiction may include:

Many crystal meth users become malnourished and sleep-deprived from continuous use. Eventually, their body will crash resulting in meth withdrawal and severe psychological symptoms. The severity of withdrawal depends on your health, how much you used, and how often you used.

Meth withdrawal symptoms may include:

The intense cravings and psychological withdrawal symptoms make it extremely difficult to stop using crystal meth on your own. Some methamphetamine users experience psychosis even after they’ve stopped using.

Treatment centers offer a variety of inpatient and outpatient options that address the physical and psychological symptoms of addiction. Although there are currently no FDA approved drugs to treat methamphetamine addiction, some medications may be used to reduce withdrawal symptoms.

Addiction treatment options can include:

Coping with withdrawal symptoms is more effective in a safe and supervised environment. A detox is a short-term inpatient program with 24/7 access to healthcare professionals. If necessary, you may be offered medications to ease withdrawal symptoms.

Contingency management reinforces positive behavior with rewards. Individuals are given tokens for achieving goals, which they can cash in for prizes.

CBT focuses on learning more about your addiction and how it impacts your life. In CBT, you will learn to identify triggers and develop healthy coping skills to prevent relapse.

If you or a loved one is seeking more information about addiction treatment, please contact Ark Behavioral Health today.

National Institute on Drug Abuse (NIDA) - What Are The Immediate (Short-Term) Effects Of Methamphetamine Misuse?
National Library of Medicine - Pharmacological Approaches to Methamphetamine Dependence: A Focused Review
National Library of Medicine - The Burden and Management of Crystal Meth Use
Substance Abuse and Mental Health Services Administration (SAMHSA) - Key Substance Use and Mental Health Indicators in the United States