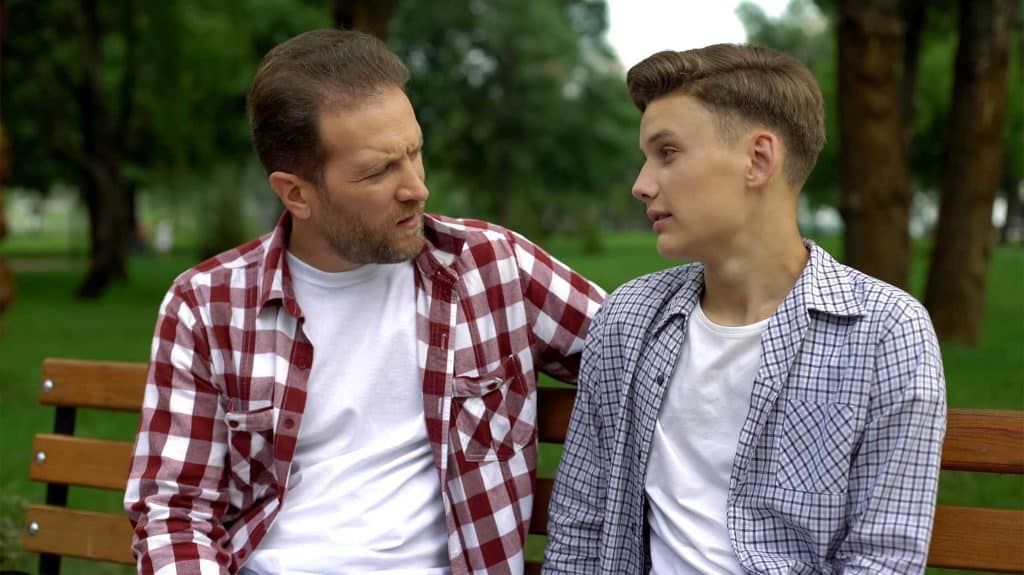 If you’ve discovered that your teen has been using this drug, it’s important to share your concerns with them.

What To Tell Your Teen About Marijuana Abuse

When talking to your teen about marijuana abuse, you should focus on several key points.

However, according to the National Institute on Drug Abuse, 30% of people who use the drug develop some level of marijuana use disorder. People who start using it before age 18 are four to seven times more likely to develop the disorder than adults.

In severe cases, marijuana use disorder can make you feel unable to stop using the drug despite negative consequences.

This may be because the drug can harm your orbitofrontal cortex, a part of the brain that helps you learn, make decisions, and control impulses. When it’s damaged, you may struggle to change harmful behaviors, including marijuana abuse.

Marijuana Can Cause Dangerous Side Effects In Teens

Remind your teen that cannabis use can cause issues with memory, coordination, learning, attention, decision-making, and problem-solving.

These issues can affect people of all ages. However, they may be more intense and longer-lasting in teenagers and young adults.

That’s because their brains are still developing. A developing brain is more vulnerable to tetrahydrocannabinol (THC), marijuana’s main psychoactive ingredient.

The side effects of marijuana make your teen more likely to:

In addition, using marijuana during one’s teen years can cause or worsen mental health problems like depression, anxiety, and psychosis (a feeling of disconnection from reality).

It can also increase the risk of schizophrenia (a mental illness that causes psychosis) in teenagers who are genetically predisposed to the condition.

Recreational Marijuana Use Is Not Legal For Teenagers

As more and more states legalize marijuana, some teens assume the drug is safe. However, due to the drug’s negative effects on the adolescent brain, no state has legalized the recreational use of marijuana for people under 21.

Moreover, legalization doesn’t mean a drug is harmless. Many legal drugs, including alcohol and nicotine, can cause serious health issues. Marijuana is no different.

Make sure your child knows they don’t have to recover from marijuana abuse or addiction alone. Help them find a substance abuse treatment program for adolescents. An effective program will offer services such as:

Also, ask your child why they started using marijuana in the first place. Many teens use the drug to cope with challenges like stress, grief, or mental illness.

They should receive treatment for these issues alongside substance abuse treatment. A therapist can help your child develop healthy coping skills so they don’t turn to smoke pot or other forms of substance use.

Tips For An Effective Discussion

Parents and caregivers can take a number of steps to make discussions about marijuana use more productive.

In general, the more comfortable your child feels, the more they’ll open up to you. That’s why you should start the conversation when your teen is calm and sober.

Also, choose a setting where your child feels at ease. Some teens prefer the comfort of home, while others may want to take a walk or hang out at a park.

When talking about drug use, many parents feel anxious or angry. While these emotions are normal, they make it difficult to communicate your concerns clearly.

Before you talk to your child, try a relaxing activity like meditating or journaling. When you stay calm throughout the conversation, your teen is more likely to listen to you.

It’s important to set clear rules regarding marijuana use. However, you shouldn’t make your child feel bad for using the drug. When teens feel judged, they’ll likely ignore you and continue abusing marijuana.

Instead of judging your teen, gently explain that you’re concerned about their well-being and want to help them. Also, avoid judgmental body language such as pointing your fingers or crossing your arms.

During the conversation, your teen may deny they have a marijuana problem or become hostile.

In this case, seek help from a trusted family member, a therapist who specializes in teen behavior, or an interventionist. These individuals can help you have a more effective conversation with your child.

If your teen struggles with marijuana use or another form of drug use, comprehensive substance abuse treatment options are available.

Is Marijuana A Gateway Drug?