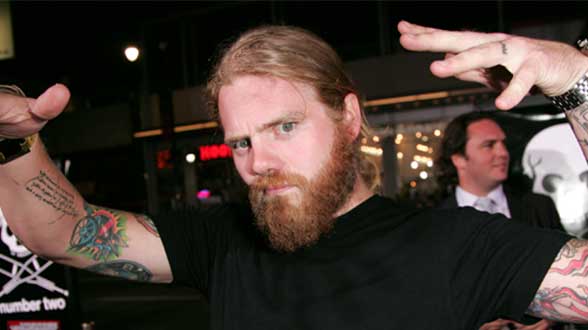 The Jackass star Ryan Dunn was known for his role in the popular reality TV series which involved several cast members, such as Bam Margera, Johnny Knoxville, and Steve-O, performing outrageous stunts and pranks.

While this television show may have been a success, Ryan Dunn struggled with alcohol abuse. Unfortunately, Ryan Dunn died in an alcohol-related car crash in 2011 at the age of 34.

Dunn’s career began when he became involved with the stunts performed on the MTV reality TV series Jackass. From 2000 to 2002, he participated in countless episodes of the show as well as the numerous movies that followed.

Before this, Dunn appeared in the daredevil video series CKY. After his Jackass era, Dunn and his friend Bam Margera performed the Viva La Bam show which took place throughout Europe. In addition to this, Dunn participated in G4’s Proving Ground as a co-host.

In addition to the Jackass TV series, Ryan Dunn was credited in a number of other films such as:

Ryan Dunn and his production assistant Zachary Hartwell died on an early Monday morning (June 20, 2011) in West Goshen Township in Chester County, near Philadelphia. The cause of death was a car accident.

Before celebrity news sites such as TMZ announced the death of Dunn, social media became aware that alcohol may have been involved in the car crash due to Dunn posting photos online at a bar named Barnaby’s located in West Chester.

According to the West Goshen Township police chief Michael Carroll, Dunn was traveling at 132-140 mph when the accident took place. In addition to this, Dunn’s blood alcohol content level was 0.196%, much higher than the legal limit of 0.08%.

Dunn was driving a Porsche 911 GT3 which was found at the crash site. Reportedly, Dunn’s Porsche slammed into a guardrail, crashing into the woods nearby. The police report stated that blunt force and thermal trauma was the cause of death due to the impact of the crash as well as the fire which occurred afterward.

In the aftermath of Ryan Dunn’s death, many of his Hollywood co-stars posted tributes and condolences on various social media platforms, leading to the celebrity trending online.

Six years before his death, in 2005, Dunn was convicted of an alcohol-related DUI. During this time, he finished the first offender’s program. Following this, Dunn’s record was cleared due to his good behavior.

Dunn may have also struggled with mental health issues like depression, which may have contributed to his frequent alcohol abuse issues. Like many of his co-stars on Jackass, alcohol and drug misuse was an ongoing struggle.

Ryan Dunn received substance abuse treatment in 2005 following his DUI. He enrolled in an addiction treatment program, which he completed.

Despite addiction treatment, it’s important to maintain a schedule that involves recovery resources. Treatment programs can be helpful, as can certain 12-step groups such as Alcoholics Anonymous (AA). It’s unclear how involved Ryan Dunn was in his recovery efforts.

Severe alcohol intoxication increases the risk of accidental death. However, recovery is possible with professional assistance and a network of support.

To learn about how we treat alcohol use disorder with a combination of medication, therapy, and peer support, please contact Ark Behavioral Health today.