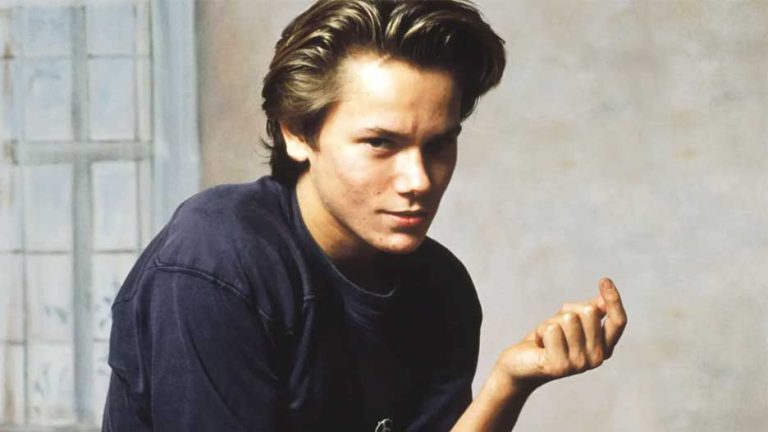 On October 31, 1993, the actor River Phoenix died of heart failure linked to a cocaine and heroin drug overdose. He was 23 years old at the time of his death.

River Phoenix rose rapidly through the Hollywood ranks due to his child actor background. His supporting and lead actor roles in Stand By Me, Running on Empty, Indiana Jones and the Last Crusade, and My Own Private Idaho displayed his acting talent and potential.

River Phoenix’s legacy is one of an outstanding young talent, whose life was cut short by tragedy.

His portrayal of talented yet troubled youth in his acting career was retroactively applied to his own life. Actors such as Leonardo DiCaprio credit Phoenix as a major inspiration for their own acting careers.

River Phoenix was born in Oregon under the given name River Jude Bottom. He was the oldest of five children, and the brother of future actors Rain and Joaquin Phoenix.

River’s parents were a part of a religious sect known as the Children of God, and as a result his family lived in Venezuela before settling down in Los Angeles, California.

As a young actor, Phoenix played various television roles before making his film debut at the age of 15, in the movie Explorers.

He would gain critical and popular acclaim with roles in Stand By Me, The Mosquito Coast, My Own Private Idaho, and The Thing Called Love. The latter two films would co-star Keanu Reeves and Samantha Mathis, respectively.

Phoenix earned an Oscar nomination for his supporting role in Running On Empty. At the time of his death, Phoenix was filming the movie Dark Blood. The film remained unfinished and would not premiere until 2012.

On October 30, 1993, River Phoenix arrived at the Viper Room nightclub in West Hollywood, along with his girlfriend Samantha Mathis, his brother Joaquin, and his sister Rain.

During the performance, Phoenix announced that he was not feeling well. Outside the nightclub shortly after, he suffered convulsions, seizures, and cardiac arrest, and attempts to resuscitate him were unsuccessful.

Phoenix was pronounced dead at Cedars-Sinai Medical Center on the morning of Halloween, 1993. The official cause of death was heart failure due to acute multiple drug intoxication involving cocaine and morphine, heroin’s metabolite.

Up until his untimely death, River Phoenix did not have a reputation for drug abuse or addiction, and never attended rehab.

Frusciante, who had a history of substance abuse at this point, stated that he and Phoenix went on a multi-day binge of heroin and cocaine directly before Phoenix’s death. During this binge, neither Frusciante nor Phoenix slept.

The combination of cocaine and heroin in Phoenix’s system, combined with the lack of sleep, may have led to River Phoenix’s death. His girlfriend Mathis recalled that she was unaware of Phoenix’s recent binge, but knew that Phoenix was not his usual self.

About a month after the actor’s death, Phoenix’s mother wrote a piece for the Los Angeles Times, wondering how many unknown young people have lost their lives to recreational drug use.

Even minimal drug abuse can be life-threatening for people from all walks of life, but recovery is possible.

With professional help and a strong network of support, anyone can overcome substance use and live a healthy and fulfilling life. For information on our professional treatment options, please contact us today.