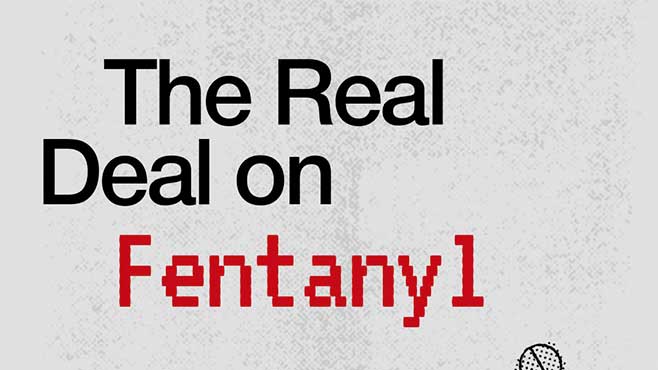 Fentanyl is a synthetic opioid that’s up to 50 times stronger than heroin. Although it’s extremely powerful, it’s cheap and easy to make. That’s why many drug dealers secretly add it to powder drugs (like cocaine and meth) or use it to make counterfeit pills that resemble popular prescription drugs (like Xanax and OxyContin).

These fentanyl-laced substances have caused a surge in overdose deaths, especially among teenagers.

In 2020, 76% of drug overdose deaths among people ages 14 to 23 involved fentanyl. However, 73% of teens hadn’t heard that fentanyl often appears in counterfeit pills. That’s why multiple organizations have come together to launch the “Real Deal on Fentanyl” campaign.

What Is The Real Deal On Fentanyl Campaign?

The Real Deal on Fentanyl campaign is a public health campaign designed to educate teens on the dangers of fentanyl so they can protect themselves and their friends.

The campaign was developed by creative agency JOAN Studios in partnership with nonprofit organization The Ad Council. It was funded by leading social media companies YouTube and Snap.

For its first major project, the campaign enlisted former drug dealers who have since devoted their lives to educating people on the dangers of drug abuse and addiction. They held classroom-style lessons for students at a high school in Holyoke, Massachusetts, a city badly impacted by the fentanyl crisis.

The lessons focused on important fentanyl facts, including:

These lessons were filmed and edited into short public service announcements (PSAs) to be shared on social media.

Social media plays an essential role in the Real Deal on Fentanyl campaign. That’s because American teens use social media for an average of more than three hours per day.

Along with the PSAs, the campaign has launched other efforts to raise awareness of fentanyl-laced drugs:

For example, it lists common symptoms of a fentanyl overdose, which include:

The site also addresses harm reduction strategies. For instance, it explains how to get and use naloxone, the life-saving medication that can quickly reverse a fentanyl overdose. It also discusses how to use fentanyl test strips (while acknowledging that they’re not always accurate).

In addition, the site has free informational graphics about fentanyl that you can download and share on social media.

While the campaign’s main website targets teens, DroptheFBomb.com targets adults. It explains how parents and caregivers can help their children stay safe during the opioid crisis. In particular, it offers clear, practical advice on talking to kids about fentanyl and harm reduction strategies.

The site was created in partnership with Meta, the company that owns Facebook and Instagram. Meta plans to advertise the campaign across its sites to reach as many people as possible.

Many organizations and social media platforms have partnered with the Real Deal on Fentanyl campaign, including:

Along with posing a high risk of overdose, fentanyl is extremely addictive. The most common symptoms of fentanyl addiction include:

If you think you or someone you love is addicted to fentanyl, seek help at a substance abuse treatment program. These programs offer a variety of services to help you stay drug-free, including medical detox, mental health counseling, and support groups.

To learn more about fentanyl addiction treatment options, please reach out to an Ark Behavioral Health specialist. Our inpatient and outpatient treatment programs provide personalized, evidence-based care to keep you or your loved one healthy.