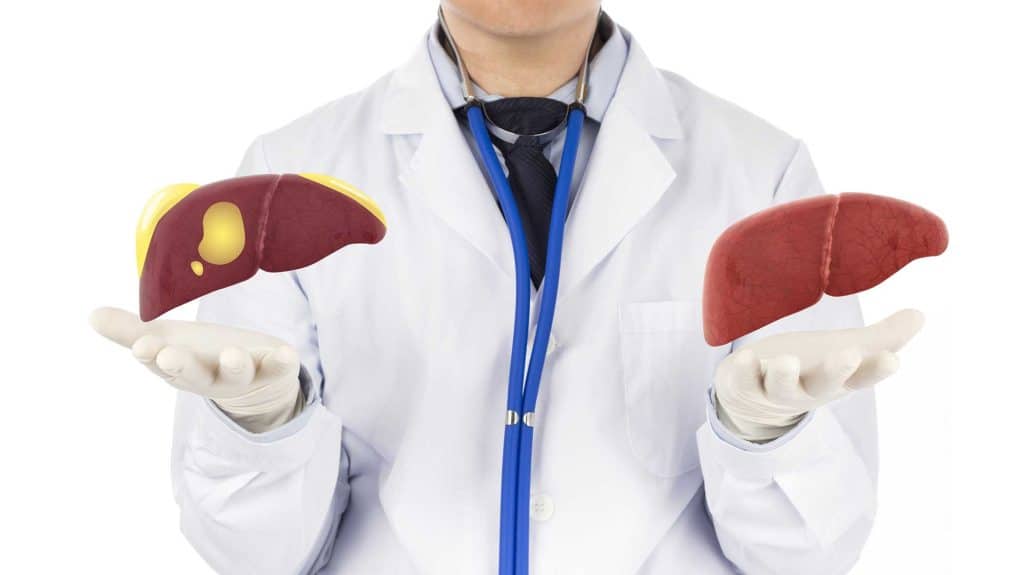 The liver is the largest solid internal organ in the body and plays a singular role in processing nutrients and filtering out toxins and other harmful substances that have been absorbed into your bloodstream.

These harmful substances include alcohol and its metabolites, which the liver is able to eliminate at a rate of about one standard drink per hour.

However, if the liver is exposed to too much alcohol for too long, it can become injured, leading to serious health problems and alcohol-related liver diseases that begin with hepatic steatosis (otherwise known as fatty liver disease).

Also known as steatohepatitis, fatty liver disease/hepatic steatosis occurs when fat builds up in the liver to unhealthy levels, resulting in inflammation and liver cell damage.

Effects Of Alcohol On The Liver

Alcoholic fatty liver develops due to the effects of alcohol on the liver tissue, which interfere with the liver’s ability to process lipids, causing them to be stored in the tissues of the liver in higher concentrations than normal.

This unhealthy buildup of fat can lead to increased liver inflammation and tissue damage over time.

Alcoholic fatty liver disease is considered the first stage of alcohol-related liver disease (ALD), a progressive and potentially fatal series of conditions resulting from the toxic and harmful effects of alcohol addiction.

In most cases, both alcoholic and nonalcoholic steatohepatitis cause no noticeable external symptoms. Otherwise, persons may feel tired or have discomfort or pain centered in the upper right of the abdomen.

However, if excessive alcohol intake continues and the degree of liver damage grows worse, alcoholic steatohepatitis can develop into more severe forms of ALD, including alcoholic hepatitis or cirrhosis of the liver. This may prompt symptoms such as:

NAFLD is widely prevalent in many different worldwide populations and is estimated to affect 30-40% of the United States population, to one degree or another.

Closely Linked To Alcohol Use Disorder

The prevalence of alcoholic liver disease, however, remains closely linked to rates of alcohol use disorder and is estimated to develop in approximately 2% of Americans with an estimated mortality of at least 5.5 out of 100,000 individuals in 2010.

These rates have increased significantly over time, both in the United States and abroad.

Researchers attribute this change to increasing alcohol consumption per capita in much of the world, along with an increase in obesity and increasingly sedentary lifestyles in the developed and developing world.

Alcoholic fatty liver is likely the first stage of ALD, not the last. If heavy alcohol use continues, the fatty buildup and inflammation of the liver will increase, resulting in a condition of prolonged liver inflammation known as alcoholic hepatitis.

At this stage, the liver is still capable of remarkable regeneration, and with abstinence from alcohol and other healthy lifestyle changes, most people can resolve their ALD without any other form of treatment.

However, after this point the damage to the liver will only grow worse, leading to fibrosis, or a buildup of scar tissue in the liver as hepatocytes (liver cells) die off and the organ patches up the damaged tissue.

This scarring of the liver can then develop into cirrhosis, a dangerous and generally irreversible late-stage form of ALD in which liver function is compromised, eventually resulting in fatal end-stage liver failure.

Cirrhosis is also treated with abstinence from alcohol and positive lifestyle changes, as well as with liver transplants if the damage is too severe for the body to regenerate.