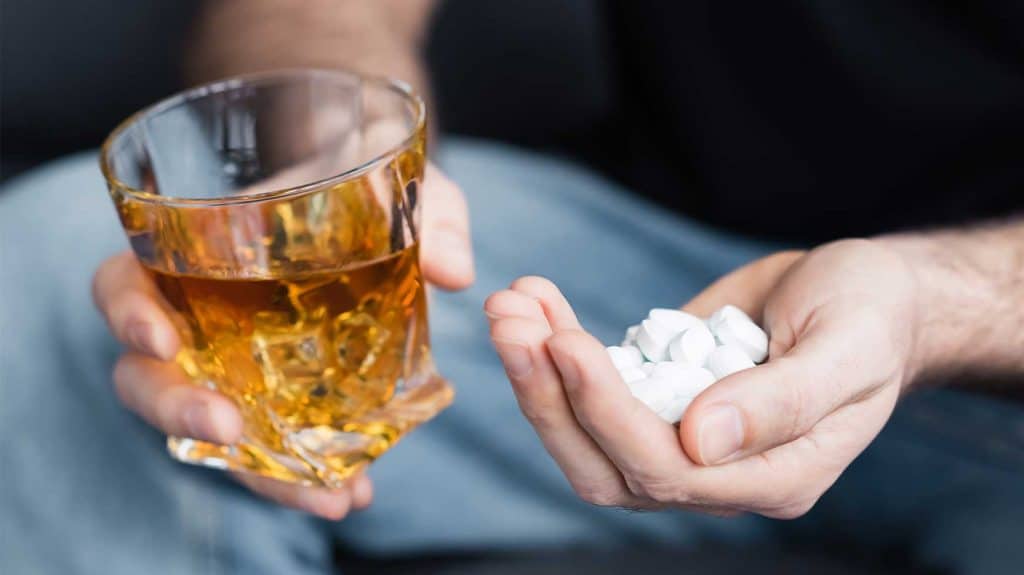 Mixing alcohol and opioids can be highly dangerous, leading to side effects like slowed breathing, vomiting, hallucinations, and death.

Opioids and alcohol are two of the most used substances in the United States. The practice of prescribing opioids as painkillers peaked in the early 2010s and are still relatively high today. Alcohol consumption also remains high in the U.S.

Many prescription opioids come with a warning on their label to avoid mixing them with alcohol. The dangers of mixing these two depressants are well-known, but rates of their combined use are still high, partly due to the rise of synthetic opioids like fentanyl.

Effects Of Mixing Alcohol With Opioids

On their own, opioids bind to receptors in the brain to act as strong painkillers. They cause feelings of euphoria and relaxation by increasing dopamine amounts in the brain, and the body responds by lowering blood pressure, heart rate, and other functions.

Opioids and alcohol are both depressants that slow down brain activity. When taken together, alcohol can enhance the depressant effects of opioids, leading to potentially dangerous levels of sedation and impairment.

Even standard doses of opioids can become risky when taken with alcohol. How alcohol and opioids interact in the body is still not fully known. One theory centers around ethanol, alcohol’s main ingredient, changing how opioid receptors work.

Dangers Of Mixing Alcohol With Opioids

Alcohol may enhance the negative effects of opioids. If you take opioids for chronic pain relief, your doctor may tell you to stay away from alcohol.

The combined effects of alcohol and opioids in your central nervous system can create severe depressant effects due to the slowed brain activity. Side effects of opioids may be increased with alcohol, leading to:

Heroin and synthetic opioids (like fentanyl) had the highest rates of substance abuse with alcohol. Fentanyl also contributed to a spike of over 30,000 opioid overdose deaths in 2020, though data on how often it was mixed with alcohol is still unknown.

Methadone maintenance treatment (MMT) is a common treatment for patients who have an opioid use disorder. Taking decreasing doses of methadone daily can help reduce patients’ withdrawal symptoms and cravings while weaning them off opioids entirely over time.

Methadone is also an opioid, which can have risks when mixed with alcohol just like other opioids. Studies show that between 30 to 40 percent of patients in methadone treatment have some sort of drinking problem, putting them at a higher risk of an opioid overdose.

The high rates of alcohol use in opioid detox and medication-assisted treatment (MAT) programs are a point of concern for health experts. Some studies have suggested more screenings for alcohol in substance use disorder treatment programs, and interventions if needed.

About 25 percent of patients who have an opioid prescription misuse their opioids. Opioid misuse for illegal opiates, like heroin, adds to the widespread opioid misuse in the U.S. Mixing alcohol and opioids is one dangerous form of opioid misuse.

Over 150 million opioids were given out as prescription medications in 2019, while over 50% of adults polled in a 2019 national survey reported drinking alcohol in the past month. While opioid prescriptions have gone down since 2010, opioid overdose deaths spiked in 2020.

If you feel like your drinking habits or opioid drug use patterns put your health at risk, looking for help at a treatment center may be the right choice for you. To find an inpatient or outpatient program that can help you stop taking opioids, please contact our helpline today.