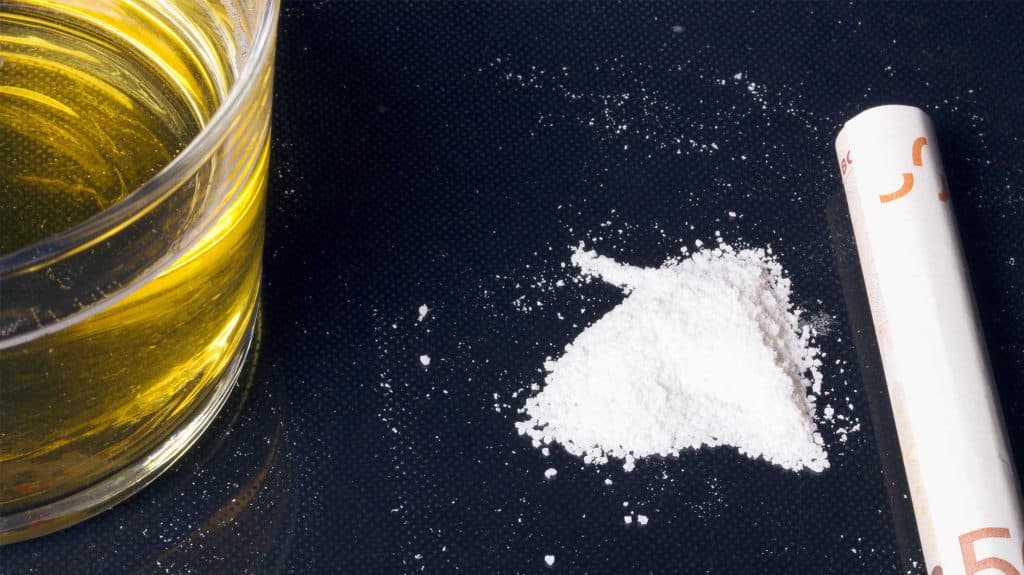 When used individually, cocaine and alcohol both pose serious risks to a person’s physical and mental health. When taken together, alcohol and cocaine can lead to dangerous and life-threatening reactions.

Mixing these substances is particularly dangerous because cocaine can mask the effects of alcohol. This can lead to binge drinking, unpredictable behavior, alcohol poisoning, and sudden death.

Both alcohol and cocaine interact with the central nervous system (CNS), which controls important bodily functions. However, while alcohol is a depressant drug, cocaine is a stimulant drug. A depressant slows the functions of the CNS and stimulants speed them up.

Combining both drugs is dangerous because cocaine can counter the effects of alcohol. In addition, alcohol lowers inhibitions and cocaine may increase impulsivity. This can make it difficult to gauge how intoxicated you are and lead to binge drinking.

Alcohol slows down the brain and body, which can impact mood, behavior, judgment, and movement.

Even one or two drinks can lower inhibitions, which may initially make a person feel relaxed or euphoric. However, decreased inhibitions can lead to high-risk behaviors, like mixing alcohol with other drugs.

The most common side-effects of alcohol use include:

Cocaine speeds up the messages between the brain and body and increases levels of the neurotransmitter (chemical messenger) dopamine. Dopamine is associated with the reward system in the brain and contributes to feelings of pleasure.

The increase of dopamine caused by cocaine may result in euphoric effects. However, some people may experience paranoia, anxiety, agitation, and aggression. There is an increased risk of experiencing these effects when taking high amounts of cocaine or mixing it with other drugs.

The most common side-effects of cocaine use include:

Long-term cocaine abuse can lead to increased paranoia, which may result in psychosis. Psychosis can cause delusions and auditory hallucinations (hearing things that aren’t real). Heavy cocaine use can also have severe effects on the cardiovascular system, including an increased risk of stroke.

Alcohol is commonly used alongside other drugs, including cocaine. Mixing these two drugs can lead to high-risk behavior, addiction, and life-threatening consequences.

Alcohol lowers inhibitions and impairs judgment, which can lead to high-risk or unpredictable behavior. Cocaine is likely to increase impulsive behavior and can contribute to increased alcohol and drug abuse.

According to the National Library of Medicine, combining alcohol and cocaine is associated with an increased risk of violent thoughts. Depending on how the substances affect a person, alcohol and cocaine can also lead to violent or aggressive behavior.

Some people who combine the two substances may feel less intoxicated because cocaine masks alcohol’s effects. However, this can lead to binge drinking and increases the risk of alcohol poisoning.

Signs of alcohol poisoning include:

The liver processes most drugs into metabolites before they are eliminated from your body. When your liver metabolizes cocaine while you have alcohol in your system, it creates a metabolite called cocaethylene.

Cocaethylene is similar to cocaine but can last up to five times as long as cocaine in your system. It can have adverse effects on the immune system and increases the risk of seizures and liver damage.

Most importantly, cocaethylene is up to 25 times more likely to lead to sudden death compared to cocaine by itself.

Substance abuse increases the likelihood of becoming dependent, which means your body needs the substance to avoid withdrawal symptoms. Long-term alcohol and drug use can also lead to cocaine addiction or alcohol use disorder (also known as alcohol addiction).

Addiction may result in intense cravings and the inability to stop drinking and taking drugs despite repeated attempts. Although addiction is a challenging and complex disease, treatment can help you learn to manage cravings and improve your quality of life.

If you or a loved one is struggling with drug or alcohol abuse, please contact Ark Behavioral Health to learn about treatment options.